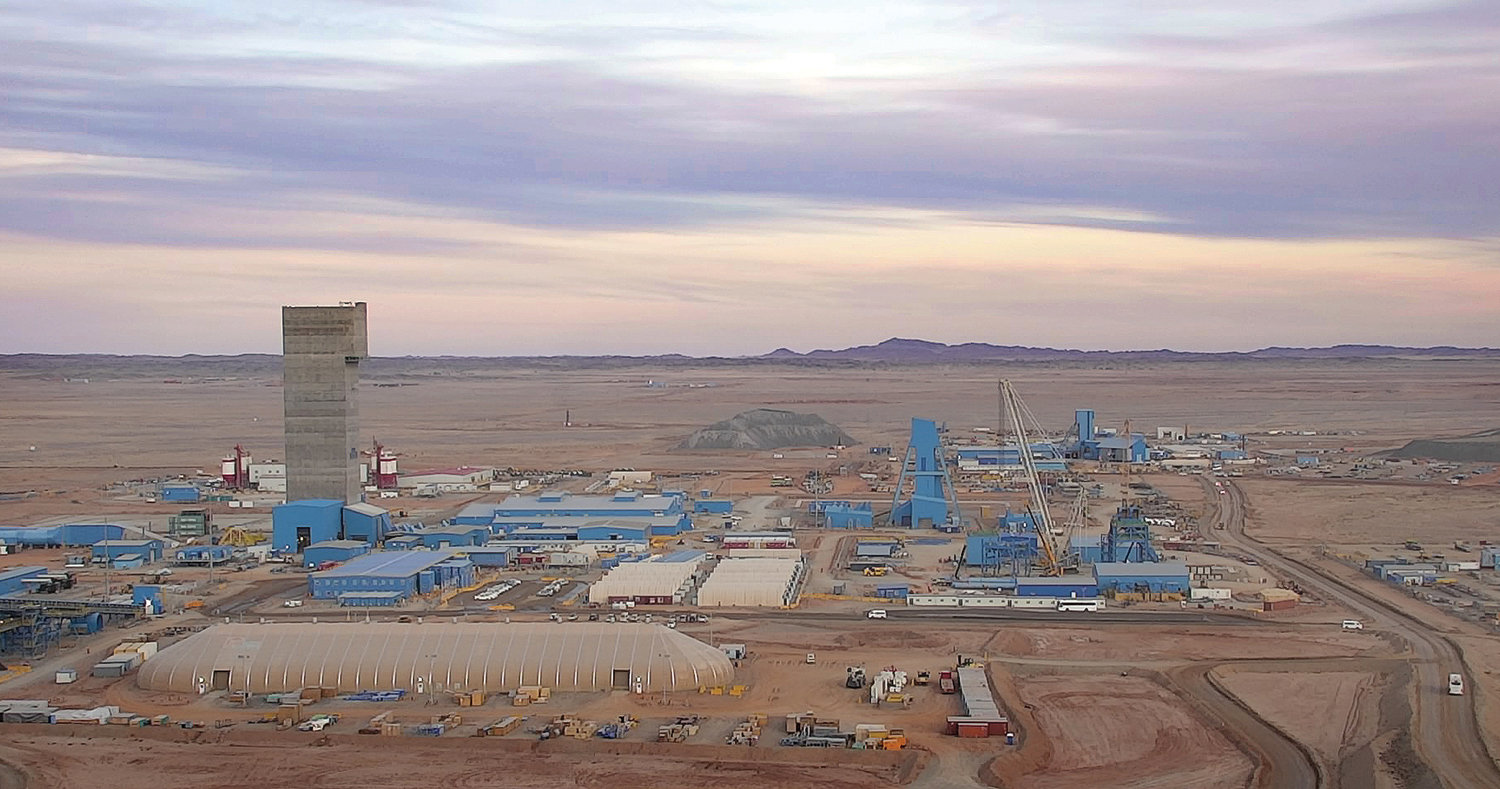 G. Batsukh, Chairman of the Board of Directors, Oyu Tolgoi LLC

Towards the end of last year, an important event took place in the history of modern mining in Mongolia. It was the completion of a production shaft, one of the key infrastructure facilities of the Oyu Tolgoi Underground Project, with its headframe tower rising to the sky.

On the vast plains of Khanbogd, two distinct landmarks now catch our eye. First is Mt. Khanbogd, proud to be blessed by the sun. This sacred mountain, created by God, contains the best of minerals, and is also a storehouse of history and legends, a slice of human culture. God only knows how and when it was created and what it has seen since then. The second landmark, not far away from the sacred mountain, is the Oyu Tolgoi tower – built only recently by human intelligence and hard work. It looks mesmerizing, especially at dawn and dusk. I ask for your forgiveness for daring to compare these two “creations”, but, as it is said, there is always some connection between things.

This magnificent tower is the first of its kind in the Southern Gobi Desert, embodying modern mining technology and standards. Its progress followed a chequered path. Had its construction not been stopped in 2013, shortly after its start, it would have been ready in 2016. Misunderstanding and distrust between stakeholders had led to the halt and it was a bitter lesson. The decision to resume underground development was taken in 2016 and now we have this wonderful facility.

Such a complex feat, including the best designs, engineering solutions and use of state-of-the-art equipment, has been accomplished by our national engineers, technicians and workers, something that everyone should be proud of. Construction – from resumption of sinking onwards – has taken three years and four months. Close to 50 national companies and 2,500 people worked safely for approximately 2.6 million hours to complete this facility – an outstanding achievement by any means.

These numbers prove an emergence of world-class occupational health and safety standards and culture in underground and surface construction and development in Mongolia. Skilled and experienced expats have played an important role in this development. Mongolian engineers, technicians and builders, who have completed this massive, yet delicate, task, have now acquired the knowledge and skills to work on underground development projects anywhere in the world. I’m hopeful that the time will come when it is widely understood and acknowledged that such intangible assets, emerging in the heart of the Gobi Desert, have more value than money.

Let me share a few details of this magnificent facility. Construction has required 7,800 cubic meters of dry cement, all sourced from MonCement and MAK Cement, in keeping with Oyu Tolgoi’s national procurement policy to support local products over cheaper imports. Among the other material used were 4.8 million tonnes of metal structures, 15,400 metres of metal pipes and 317,500 metres of cable.

This vertical structure rises from 1,284 m below the ground to 96 m above it, with a diameter of 10 m. The total height is equal to that of 15 of Shangri-La Ulaanbaatar towers – 14 below ground and 1 above. Both this new landmark and the ageless Khanbogd Mountain are living and functioning structures, deep rooted in mother earth.
The shaft has two hoists, one for service and one for production. The service hoist has a double-deck cage to transport 300 people at a time and travel 1.3 km in 2.5 minutes at a speed of 10 m/s. In comparison, elevators at Shangri-La Ulaanbaatar Tower travel at a speed of 3 m/s.

The other hoist has two skips, each to lift 60 tonnes of ore and travel at a maximum speed of 16.4 m/s. It is the largest friction hoist system in the world. Invented in 1877 by a German engineer Frederick Koepe, friction hoist is the most common type of hoist used in underground mining and is commonly referred to as Koepe hoist. This hoist at Oyu Tolgoi uses two of the world’s largest Koepe winders, each 6.7 m in diameter and weighing about 56 tonnes. The system uses 32 kilometers of steel wire ropes, equal to the distance between Amgalan bus terminal and Chinggis Khaan International Airport in Ulaanbaatar.

Commissioning of the production shaft enables more workmen, material and equipment to be transported and operate underground, accelerating and improving both safety and productivity. Its main job is to carry ore extracted underground to the surface. Until now, the work was done by a service shaft, which has a cage for 60 people only. From now on, underground development will have increased reliability, speed and productivity. Also, a traveller with a spare horse travels longer.

One ventilation shaft is already operational and two more are under construction. Oyu Tolgoi will thus have five shafts to support life-of-mine operations. Earlier, these shafts were simply called Shaft 1, Shaft 2, and so on. In consultation with a former President of Mongolia, Dr P.Ochirbat, Dr B.Laikhansuren, Ch.Tegshsaikhan, Consulting Engineer N.Algaa, and the Head of the National Council on Language Policy, N.Narangerel, we introduced a new convention, renaming the underground mine shafts according to their function, i.e. Service Shaft, Production Shaft, South Ventilation Shaft, Mid Ventilation Shaft and North Ventilation Shaft. The shafts, along with other infrastructure facilities, will spring up one after another as planned in the coming years.

The comprehensive Oyu Tolgoi Mine Complex, including the open pit and underground mines, associated infrastructure facilities, employees’ accommodation and several wellbeing and sports and recreation facilities are under development in accordance with the company’s 10-year development strategy, approved in 2018. As part of the plan, the Mazaalai food processing and service centre, the Khanbogd - Oyu Tolgoi paved road, the Chandmani underground operation and service centre, and the expanded central heating plant have already been commissioned. Yet to come is transformation of Khanbogd soum into a modern town, where small and medium enterprises are to be developed and which would provide 60-70 percent of the mine’s permanent employees.

The Democratic Revolution took us into a free market economy and opened the doors to investment and technology from third-neighbour countries. Oyu Tolgoi is the result of extensive investment from third neighbours and is a pioneering mega project in Mongolia. Pioneers face challenges. The Oyu Tolgoi family, comprising strong, well-educated, hardworking and highly-disciplined miners who strive for safety, is quietly working day and night, no matter what the natural and social weather, to create value for the local community and to make Khanbogd an illustrious example of a bright future. What is worth doing at all is worth doing well.

The future of Umnugobi is in the hands of the new generation born and raised there. The three millionth citizen of Mongolia was born there, and I believe it wasn’t a coincidence. The four millionth citizen might be born in Khanbogd as well. They are to develop the country and make Mongolia better known to the world. The Gobi will then be known for its prosperity, and not just for its dinosaur fossils. There will be a free-trade zone, Mongolia-China manufacturing, trade and tourism centres, and geo parks based on dinosaurs, and extinct and present flora & fauna in the heart of Galba Gobi, which will welcome youngsters from Ulaanbaatar, the provinces of Bayan-Ulgii and Sukhbaatar. They will come by bullet train to mingle with tourists from Tokyo, Seoul, Shanghai and Beijing pouring down at the Khanbumbat airport, next to Oyu Tolgoi. Oyu Tolgoi has a major role in making this dream come true, but its success will depend on a long-term and well-directed policy and honest and sincere cooperation between the shareholders.

Local people believe Mount Khanbogd to have its own deity in the form of a charming woman wearing a green silk dress and riding a white camel. The new landmark should please the deity and win her favour, since Oyu Tolgoi in Khanbogd represents the move of the Umnugobi region to the 21st century. Oyu Tolgoi’s true contribution to the development of the entire Gobi area is yet to be fully understood. As the famous Latin phrase goes. Tempus consilium dabet, or time will show. My humble intention is to point out some of the steps on the way to that realization, and not to start any debate.
It makes one feel pleased to hear that the locals are taking as a good omen, for these two “creations”, one by God and another by Homo sapiens, standing in neighborhood.