An agreement on setting up a gold refinery in Mongolia was signed during Prime Minister U. Khurelsukh’s visit to Kazakhstan in October 2019. The signatory on behalf of Mongolia was B. Achitsaikhan, CEO of Erdenes Alt Resource. G. Iderkhangai finds out from him the terms of the agreement and the progress on the ground. 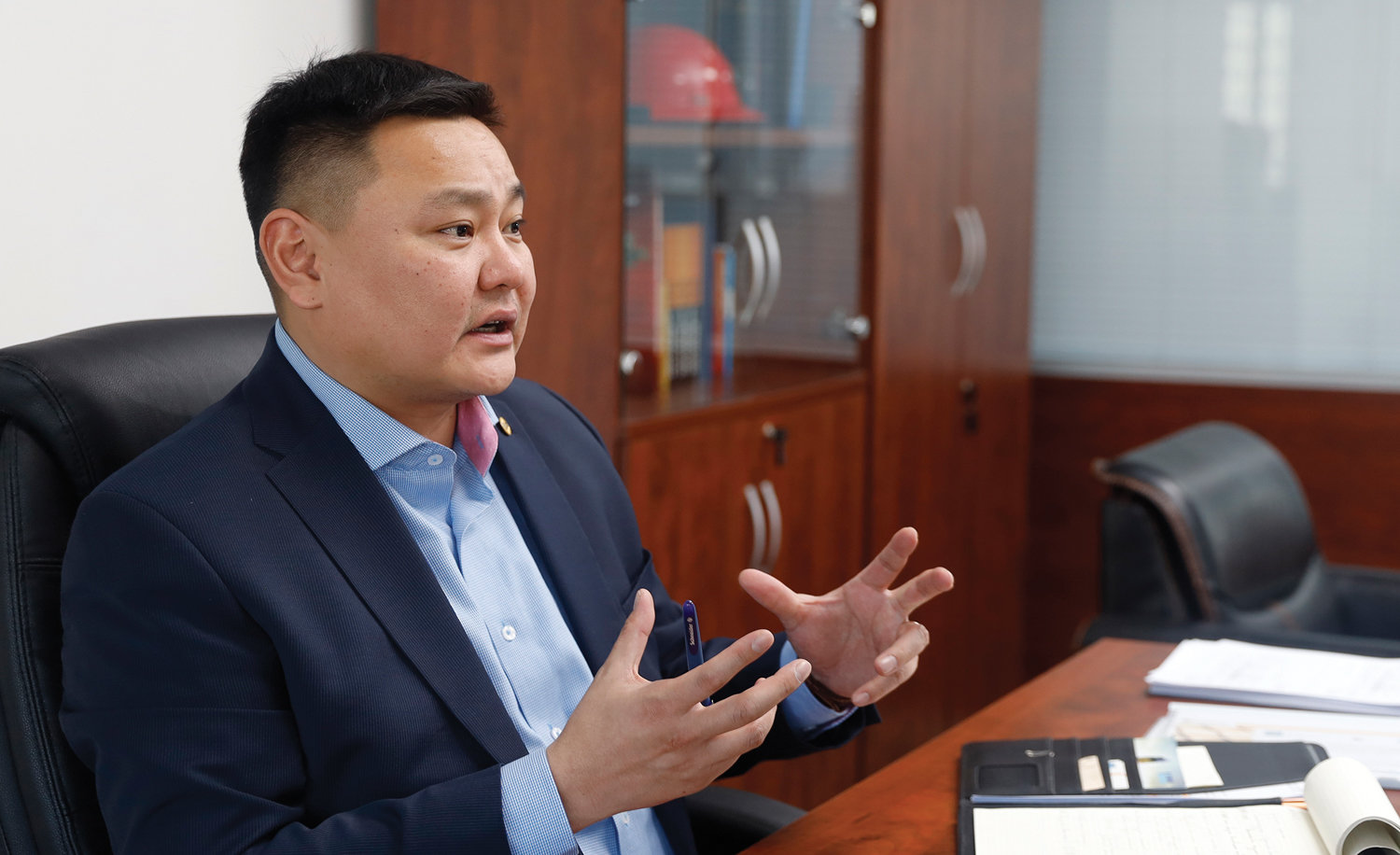 A viable refinery must have adequate raw material to feed it. How successful has been Erdenes Alt Resource in prospecting, exploring, and extracting the precious metal?
Our company’s key goal is to build a gold refinery in Mongolia. From the very beginning we have been working with support from the Ministry of Mining and Heavy Industry and our parent company, Erdenes Mongol, on preparing for this. We have chosen the location and are now studying what kind of infrastructure we shall need. The environmental impact assessment is more or less complete, and the feasibility study has been discussed at an extended session of the Professional Mineral Council.

The National Security Council has listed the gold refinery among projects of strategic importance. How does this affect your mandate?
Our work on the refinery is now governed by the Law on State and Official Secrets and we have to strictly follow the rules and procedures set out in the law.

Tell us more about the agreement signed in Kazakhstan, particularly how it allows Mongolia to have free access to an expensive technology?
A gold refinery had been under discussion for quite some time. The Committee for Development and Innovation conducted some preliminary research, and the Bank of Mongolia and the Ministry of Mining and Heavy Industry established a joint working group to study the issue. All these studies led to preparation of a feasibility study, work on which was significantly intensified since 2017. Everything indicated that the gold refinery of Kazakhstan was the most suitable for our country and a policy decision was taken to seek their cooperation. As for the technology, this costs $30 million but we hope to get it for much less, as the feasibility study was made by Daniel M, an international consulting service, and the people managing Daniel M were awarded by the Euro-Asian Patent Federation in December 2018 the patent to this method of purification of precious metals.

Is there likely to be any legislative obstacle to building the refinery?
No, as all legal requirements have been generally taken care of. Detailed legal regulations have been included in Parliament resolutions, Government policy papers and other documents, such as the State Policy on Mineral Resources Sector approved in 2014, the Sustainable Development Concept-2030, the Government’s Action Plan 2016-2020, and the Economic Reconstruction Programme approved in 2016. A gold refinery is now among the formally designated means to improve the economic capacity of the country and to ensure sustainable growth. Gold–2, a national programme, includes building the refinery. Also, the job of building it was given jointly to the Government and the Bank of Mongolia by the Economic Standing Committee of Parliament in 2018.

What does the feasibility study say about the construction?
It says regular production would begin within a year of start of construction. The refinery would be a two-storey building, 108 metres long and 48 metres wide. It will have a staff strength of 78, half of them engineers and technical staff.

Where will it be built?
The building will come up in 32 khoroo, Songinokhairkhan district on four hectares of land granted for the purpose by the Governor of the Capital City. The exact spot is in the southeast ravine of the Songinokhairkhan Mountain and is about two kilometers south from the security cycle of the old Checkpoint #22. The international practice is to situate a gold refinery near the airport, mainly because of security concerns. Also, the gold would be coming to Ulaanbaatar from the west, through Checkpoint #22, and will reach the refinery without having to come through the capital city.

To return to the technology, which is the most important feature of a refinery, tell us more about your choice.
Refining is basically separating the gold from all other material in the ore.

This is done in a vacuum. The method of separating organic chemical components is called vacuum distillation. At boiling temperature substances are split by the heat, and distillation is used in a vacuum to be free of atmospheric pressure. In a vacuum, liquid boils at a lower temperature and the metals are separated by splitting and vaporizing the liquid and by gravity. Separation by vacuum distillation has no negative impact on the environment. It is possible to melt and purify the precious metals already separated. This technology is used at E3 OTsM gold refinery in Ekaterinburg of the Russian Federation, Tanaka of Japan, and Argor Heraeus of Switzerland.  The Swiss company where gold from Mongolia is purified has been using this technology since 2017.

We chose this purification technology because it separates the gold from the other metals and elements fast, uses the raw material in full, and allows automation, thus ensuring safety in the workplace. In addition, it adequately meets our requirements related to the chemical composition of the raw material, mineralogy, metal content, amount of toxic components and other standards.

During our visit to Kazakhstan, we saw how its capacity for domestically refining the gold had given the country total control of its gold sector, an important boost to its security. Gold extraction has gone up by almost 300%, and there is no longer any illegal gold mining.  We can very well expect similar results once we have the refinery.

Some have questioned if we shall be able to work the refinery without a “Good delivery” certificate. This is granted only after a refinery has operated for five years without interruption, has processed at least 10 tonnes of gold in that period, not supported either illegal operations or illegal child labour, and not financed terrorism. I would like to mention one thing: Tanaka, a gold refinery of Japan which has 80 years of history, was granted this certificate only in 2019.

What is the electrochemical method that, one hears, you will use?
This new technology has speeded up the traditional method of electrolysis and can separate the gold from other metals at one-third the normal time. As no chemical substance is used during this separation process, it is an eco-friendly green technology with economical benefits. If there are metals of platinum group, additional equipment will be installed to separate them. This will allow us to separate and purify all precious metals which are now lost during purification. I would like to add that our refinery will not just purify gold, silver and other precious metals, but also produce various final products meeting the Good Delivery certificate of the London Bullion Market Association.
The Argor Heraeus technology now utilized for purification of Mongolia’s gold is not able to separate other accompanying metals, although it separates gold and silver from ore or alloy. In contrast, our refinery will separate all kinds of metals in the ore.

What about water use?
As we shall not be using chemicals, we would recycle up to 95 percent of the water.

What is its purification capacity?
Fifty tonnes of gold and 25 tonnes of silver per year. Some have wondered why we need so much capacity when our gold extraction stands at 25 tonnes. True, we could have opted for a refinery with a 20-tonne capacity, with provisions for increasing it, but the investment would have been the same.

What other work does Erdenes Alt Resource do at the moment?
We are exclusively focused on establishing the gold refinery. Once it starts operating, all the gold extracted in Mongolia could get purified there up to 99.99 percent. We shall charge a fee for the work, which would be our income. Or we can help sell through the Bank of Mongolia the gold purified at our refinery. We should make sure that enough raw material reaches us to provide sustainability to the refinery.

Apart from extracting and purifying the gold, silver and other precious metals in the ore, we would be able to produce bars meeting international bank standards and also as souvenirs. Then we could produce balls and semis so that our jewellers do not have to import these at high cost. That would help Mongolia keep its wealth in the country.

Do you think raising the gold royalty to 5 percent has had any impact on the Bank of Mongolia’s purchase of gold?
In 2019, the amount of gold sold to the bank was about 4 tonnes less than in the previous year. There are reports that gold smuggling has been increasing.