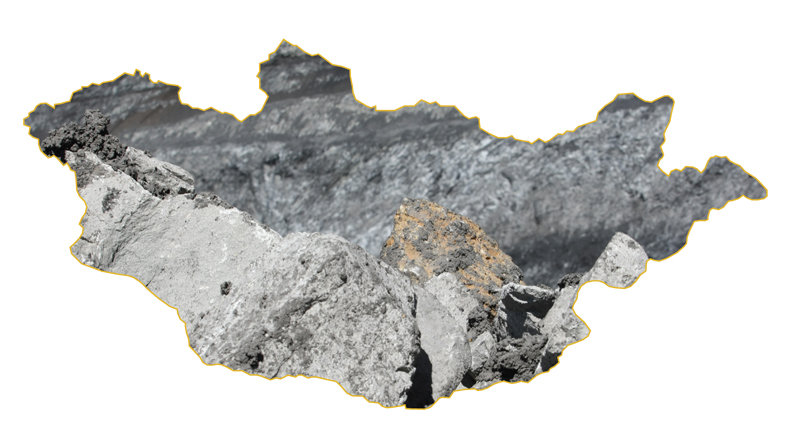 The Bayan-Uul silver-mixed metal deposit is under an exploration licence. Its central part is in Choibalsan soum of Dornod aimag, 790 km from Ulaanbaatar, some 20 km from the Khavirga border checkpoint and 27 km from the Khavirga railway relay of the Choibalsan-Ereentsav railway station. Geologically it is part of the Tsav ore node and is 25 km east from the Tsav silver-mixed metal deposit which is currently under mining.

Prospecting on 1:500000-1:200000 scales was taken up in 1975 by a Mongolia Geological Mapping Expedition team of the Geological Ministry of the former Soviet Union. This led to the preparation of a geological map, and the discovery of the Tsav ore node, the Tsav and Bayan-Uul silver and mixed metals deposits, as well as of the Salkhit, Modot, Altantolgoi and Omnod occurrences. Parts in these were identified where further detailed work was to be done.

In 1989-1990, a prospecting and geophysical expedition led by Sovgeo Company of the former Soviet Union worked in the Bayan-Uul deposit area, including the central part of the Bayan-Uul silver and mixed metal deposit. Reserves of some ore bodies were estimated under C2 classification and resources evaluated under P1 and P2 classifications. Over the years until Mongolia’s transition to democracy, several other geological teams worked here and some channel excavation was done at Bayan-Uul. Among them was a jointly conducted Complex Prospecting and Geophysical Expedition and the Dornod Geological and Exploration Expedition in 1989-1990 which evaluated the reserves of silver and mixed metals (C2) and indicated resources of the Bayan-Uul occurrences. In 2007-2010, the licence holder conducted drilling at I and IV ore bodies. Once it was accepted that the southeastern part of the deposit had been studied adequately, Khuvi Bilegt LLC got its reserves registered and resources estimated and submitted these to the Professional Mineral Resources Council in 2011 to be under C classification.

The field is under a mining licence and is located at distance of  310 km from Ulaanbaatar, 80 km from Ondorkhaan and 30km from its Omnodelger soum.
Mapping of areas around the deposit was first done in 1947, and after that more detailed mapping and general prospecting work were carried out in 1951-1952, and then in 1982. In 1983-1984, Soviet geologists conducted prospecting and evaluation work in the I, II and III ore zones and estimated the reserves and resources of ore and useful components under the C2 and P1 classifications. A feasibility study was prepared in 1986. In 1987-1989, prospecting and evaluation were done in some other zones of the deposit, and in 1989-1990, technological tests on processing the ore were conducted. In 1992, a Russian team wrote a report with the latest results of prospecting and evaluation work, and estimated the reserves and resources but these were not formally registered.

Mongon-Ondor is a small silver and mixed metals deposit with non-equable content of silver, zinc and lead. Golden Hills LLC estimated inferred and indicated resources of silver, zinc and lead in the ore under B+C classifications by reviewing results of previous work. Since 1951, systematic geological studies have been conducted throughout the Mongon-Ondor ore district. In 1978, prospecting and mapping work of 1:50000 conditions was conducted throughout the Ondor Tsagaan ore node and detailed prospecting was launched under the guidance of M.Kalafut. In 1982, preliminary exploration was completed at the Ondor Tsagaan deposit and its reserves and resources estimated. As a result of the detailed prospecting work, zones of changes with silver containing mineralization was found at distance of about 2 km southeast of the Ondor-Tsagaan deposit and named Mongon-Ondor. Several boreholes were drilled there and most of them crossed the ore bodies of the mixed metals.

In 1986, a feasibility study was made based on the reserves and resources estimated, which stood at 3,500    tonnes of metals with an average content of   236.98gr/t in the ore of 14.9 million tonnes on the ore bodies of the I, II and III metallization zones under C2 and P1 classifications.
In 2016, ARIA LLC carried out exploration work with its own funds and estimated reserves and resources of B+C classifications.

Boorj silver-mixed metal deposit is 1,380 km from Ulaanbaatar, 210 km from Khovd, 25 km from Most soum and 50 km from Tsetseg Lake saltpetre deposit.  It is in Most and Tsetseg soums, Khovd aimag.

In 1990-1993, D.Togtokh and others conducted geological mapping work of 1:200000 scale at the deposit area and discovered gold, mixed metals and rare metals occurrences and mineralized points. In 1990, N.Amitan, a geologist, made an acquaintance tour on the area at the request of the local administration, and in 1991, geologists of Altai Company from Khovd aimag, made four channels into the ore vein of the Boorj field and took samples. It was concluded that it was a deposit with promise. In 2004-2013, Mogol International LLC conducted exploration with its own funds and estimated the indicated and inferred resources of the Boorj mixed metals deposit under B1- C classifications and spent MNT450 million for the expense of geological and exploration works.
Boorj has silver and mixed metals veins and metallization of silver and accompanying mixed metals of lead and zinc. The ore body’s average length is 400 m and width 0.98 m. The high content part of the ore body occurs at a height of 2520 m-2600 m from sea level. u

The field named Modon is 820 km from Ulaanbaatar, 140 km from Choibalsan, Dornod aimag, and 80 km northeast of Choibalsan soum.
Its distance of 7-8 km from the Khavirga border checkpoint, 25 km from the Khavirga railway relay and 20 km from the Tsav mine creates favourable infrastructure condition. Geological mapping of 1:200,000 and 1: 50,000 scales of Modon field with the exploration license numbered XV-010301 and the area in its vicinity and prospecting work was started in 1940-1950s. Dornod Geological Expedition conducted the geological mapping and the prospecting. Geological mapping of 1:200,000 and the prospecting were aimed at finding out rare metals such as tungsten and tin and oil deposits.

Between 1986 and 1990, prospecting and geological mapping work of 1:50,000 scale conducted at Tsav and Bayan-Uul ore district established that there is a source of metallization of mixed metals and issued a recommendation to conduct detailed survey in the future.
Ore Zone 31 deposit is situated in the Tsav and Bayan-Uul fracture impact zone, and on the basis of its geological formation, ore composition and mineralized components, it belongs to the occurrences of zinc and lead and mineralized zones named primarily Omnod, except the deposit in the Modon Field which has the exploration license numbered XU-010301. Between 1984 and 1986, Ya.Dolgor and Yu.F.Marchenko carried out prospecting and evaluation work for Tsav deposit of the Tsav–Bayan-Uul ore node in the Modon exploration field zone and detailed prospecting work at Bayan-Uul ore occurrence; between 1986 and 1990, O. Gombobaatar, B. Tsogtsaikhan and G.Narankhuu carried out geological mapping of 1:50,000 scale in the Tsav and Bayan-Uul ore district and established that it has metallization of mixed metals, discovered about 30 ore bodies at Salkhit, Altan Tolgoi, Omnod and Modot mixed metals occurrence and issued a recommendation on conducting detailed survey in the future. BUULBL LLC conducted exploration work at the above mentioned field with its own funds and got registered reserves of the deposit under B+C classification.

Tavt is one of the deposits with silver reserves Erdenes Mongol is planning to put into circulation in the near future. It is among the 39 deposits studied for preparing to be included in the list of deposits of strategic importance under the Resolution #27 issued by the Parliament in 2007. The Tavt deposit consists of a hardrock deposit containing quartz vein with content of gold-silver-copper and is in Teshig soum, Bulgan aimag, which is 540 km from Ulaanbaatar

Russian geologists discovered the deposit between 1986 and 1988 and established that it had 130 tonnes of gold bearing ore and reserves of 370 tonnes of silver and copper. According to estimates, Tavt has 1647 kg of gold reserves of C1+C2 classifications.  There is information that M and Diamond, a Mongolian and Russian joint company, operated a test mine at the deposit.  After its establishment in 1996, this company obtained exploration license for conducting exploration in the vicinity of the Tavt deposit situated in the territory of Bulgan aimag which borders with Buryatia in the Russian Federation. At that time, a fresh estimate of reserves was approved, with that of gold increasing by 5.6 tonnes, silver by 25 tonnes and also of copper.  In 2002, M and Diamond concluded an agreement with BHM, a company with 100 percent investment by the Rimbunan Hijau Group of Malaysia, on jointly carrying out mining operations at Tavt Gold, a hardrock gold mine.  As the gold was in the form of dust when it was mined out, the cost was very high, and this led to big disputes.

Almost 10 years ago, AFK-Tavt LLC was conducting its operation at the deposit. Its operation was stopped for a temporary period as it had no approved Environment Protection Plan, Environment Monitoring Plan and Mine Plan. Previous governments tried to mine the Tavt deposit. For example, in the Directives on Geology and Mining Sectors in the Nearest Future which was issued under the Resolution #103 issued by the Government of Mongolia in 2002, it was included that the Tavt Deposit has measured resources of 4.8 tonnes.

EXTRACTION AND MINING SITUATION OF THE DEPOSITS

In Mongolia, there are not a few silver deposits. Silver products are produced in the main and accompanying forms.
Asgat in Nogoonnuur soum, Bayan-Ulgii aimag, Salkhit in Gurvansaikhan soum, Dundgobi aimag, and Mongon-Ondor in Omnodelger soum, Khentii aimag are being prepared for mining operation.
Salkhit has been commissioned into operation and has exported its products.  For the other deposits, paperwork is still being completed and funding sources being explored.
According to the feasibility study the ore processing plant at Salkhit will use the flotation method and will process primary ore with an average content of 363.3 gr/t and the average content of the concentrate will be 6,144.0 gr/t.