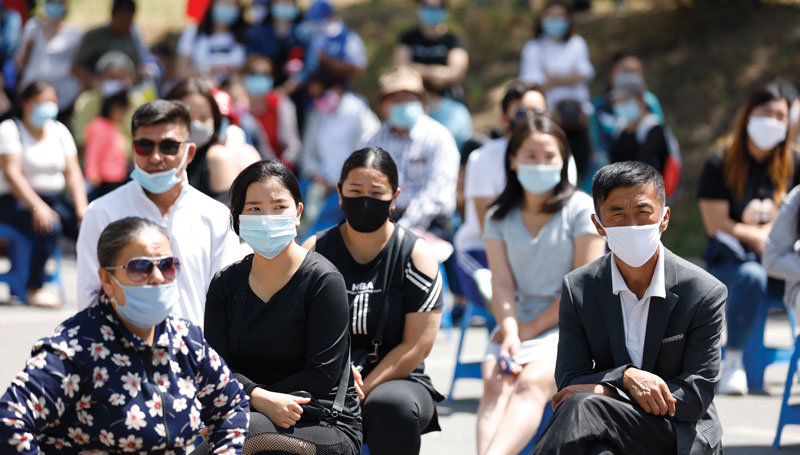 The eighth parliamentary election was held successfully on June 24 and what the 73.64 percent of the total electorate voted for is now known. This was the first election since major amendments were made to the Constitution, though this might not have had any direct bearing on the voters’ choice. At 606, the number of candidates was the most ever, though almost nobody from outside the two major parties won. Some candidates were arrested on charges not directly related to the election.
The new Parliament has 76 members, as before. Of them, 62 are from the MPP -- three less than in the last parliament, but still giving the ruling party an overwhelming numerical strength -- 11 from the DP, one each from the Right People Electorate Coalition and Our Coalition, and one independent. Altogether 13 of the victorious contestants are women. Another feature of this election was that it went back to the multi-member plurality system, expanded this time to allow all 76 members to be elected from electoral districts with many mandates.
Campaigning was somewhat different in this election because of the social distance and other regulations in force. Some candidates living abroad for the time could not even come to Mongolia and had to run their campaign online. The five candidates taken into custody, three of them from DP and two independents, also could not campaign personally. Only one of them, J. Erdenebat, a former prime minister who was an independent candidate this time, was elected. This was in Selenge aimag.

Theoretically, an election is won and lost on the basis of how voters see the candidates’ policies, set out in their respective Action Plans. The MPP based its Action Plan on Vision 2050, the party’s basic development policy paper. In its campaign, the party highlighted its achievements in the last four years and detailed its future plans. Its emphasis was on assuring people of a Life of Quality. In his capacity as Chairman of the party, Prime Minister U. Khurelsukh campaigned in all the electoral districts for MPP candidates, refusing to criticise those among them who were involved in the SME scam.
Having been out of power, the DP had nothing to claim credit for, and focused on criticizing MPP policies and actions. It was felt that DP was not really making an effort to explain how its promise to assure Growth to Each Household would actually be kept. The party chief restricted his campaign to the district where he was a candidate. As its Action Plan was not to be found in the party’s official website voters wondered if the party had any integrated and comprehensive approach beyond what its individual candidates were saying in their electoral districts. Only some days before the voting day, the DP announced that R. Amarjargal would be Prime Minister if the party won. Such declarations have never before been made during an election campaign. Some took it as showing that the party expected to be voted to power, but most saw it as a desperate bid to display self-confidence.
There was another prospective Prime Minister. Observe! Constitution 19 Coalition candidate P. Khishigbayar announced that if the coalition won, she would be Mongolia’s first female Prime Minister. Going a step beyond the DP, the coalition also announced who it would have in the government, giving the Finance Ministry to D. Jargalsaikhan, known for his columns and his De Facto TV program, and the Mining Ministry to L. Naranbaatar. This was like dividing the skin of the proverbial bear which is yet to be killed.
What will the new government look like? The amended Constitution gives the Prime Minister more freedom to choose his own team while limiting to four the number of members of parliament who can be in it. There has been no formal announcement at the time of writing but it is certain that U. Khurelsukh would continue as Prime Minister. We have to wait and see whom he chooses to serve in the new government.
That government will have a lot on its plate but our readers would be especially interested in what it would do for the mining sector. The party is committed to implementing the mega projects and set up processing plants in its new term. It would improve infrastructure in the aimags, reduce differences between the cities and rural communities, develop industries and create 150,000 new workplaces, start operations at the oil refinery and reduce oil prices by 20%-30%.
The MPP’s Development Agreement 2020-2024 Action Plan says its government will start work leading to production at the following mineral deposits:
-    the entire Tavan Tolgoi coal deposit;
-    the Oyu Tolgoi underground mine;
-    Tsagaan Suvarga;
-    Kharmagtai;
-    Asgat silver deposit;
-    Salkhit silver deposit.
Also additions and expansions will be made at the Erdenet, Baganuur, Shivee Ovoo mines and their production capacity increased.
As we wish the new government well in its plans to develop the mining sector, we would urge it to consider with an open mind some of the proposals and suggestions contained in the other Action Plans. That those who offered them were mostly rejected by the voters is no reason to summarily ignore everything in them. The MPP’s campaign slogan was Let’s Unite for Mongolia’s Development, and that is exactly what is the country needs to stay on its feet with an economic crisis at the doorstep, if not already in.