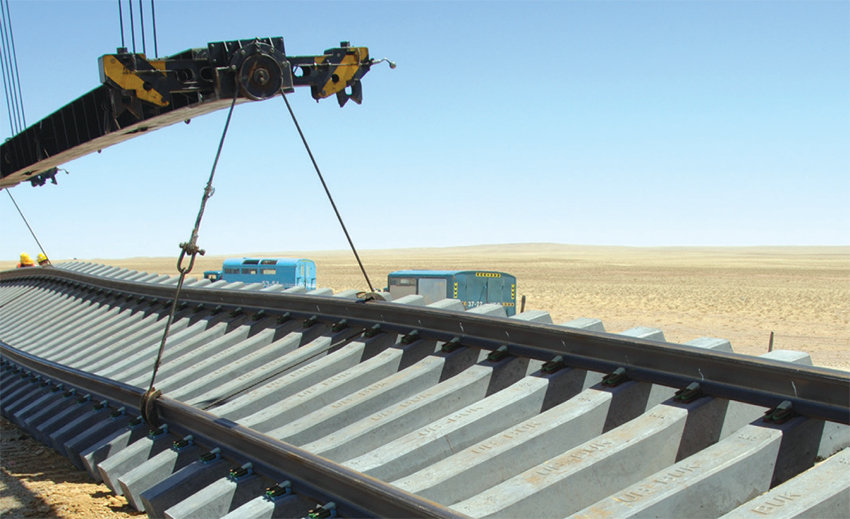 What with the pandemic and the excitement over the election, an important decision taken by the last Parliament just before its final session ended did not receive adequate attention. Following a Constitutional Court decision that Resolution #64 adopted by Parliament in 2014 had violated the Constitution it was resolved that the 267-km Tavantolgoi-Gashuunsukhait (TT-GS) railroad would have a broad gauge, thus closing a debate that had been going  on for years.

Earlier, N.Udaanjargal – in court documents he is called “a named citizen”, without referring to his name, which curiously happens to be the same as that of the current Executive Director of the State-owned Mongolian Railway  and also of  Tavantolgoi Railway, which owns 34 percent of Mongolian Railway – had submitted a petition to the Constitutional Court  requesting it to examine if Resolution #64 on “facilitating implementation of the Government policy on railroad transportation” violated Article 1.2 of the Constitution, which reads, “Democracy, justice, liberty, equity, national solidarity and conformity to the law shall be the fundamental principles of state activities.”
The Constitutional Court ruled on May 13 that the resolution was indeed in contravention of the article. That very day, the Economic and the Legal Standing Committees of Parliament met and the majority of members in both favoured acting without delay on the Court’s opinion. Showing remarkable promptitude Parliament took the decision on the railroad gauge the very next day, thus putting an end to at least a part of a debate -- more political than technical -- that had been going on ever since Parliament approved in 2010 Resolution #32 on The State Policy on Railroad Transport.

This policy has three phases. The first of these includes building altogether 1,100 km of railway: the 400-km Dalanzadgad–Tavantolgoi–Tsagaansuvarga–Zuunbayan, the 350-km Sainshand-Baruun-Urt, the 140-km Baruun-Urt–Khuut, and the 150-km Khuut–Choibalsan railroads. The second would see construction of 1,900 km of railway: the 45.5-km Nariinsukhait-Shiveekhuren, the 267-km Tavantolgoi–Gashuunsukhait, the 380-km Khuut–Tamsagbulag–Numrug, the 200-km Khuut–Bichigt, the 280-km Zuunbayan–Khangi, and the 780-km Erdenet–Artssuuri railroads. It also says, without going into specifics, that a railway-based border crossing post would be opened, and that Mongolia-China “collaboration in the railway sector will be intensified”.

The original idea was to use the narrower 1,435-mm gauge for the Tavantolgoi-Gashuunsukhait, the Sainshand-Zamiin-Uud and the Khuut–Bichigt railroads, while the Artssuuri–Erdenet, the Tavantolgoi-Sainshand-Baruun-Urt-Khuut-Choibalsan, and the Khuut-Numrug tracks would have the broader 1,520-mm gauge. This basically meant that trains going north would run on the broad gauge while those to the south would use the narrow gauge, in conformity with the tracks used in Russia and China respectively.
This was clever strategic thinking for a landlocked country looking for export markets through its only two neighbours, both great powers in the geopolitical world. That nothing in either direction has been built so far -- except for some preliminary work on the Tavantolgoi-Zuunbayan and the Tavantolgoi-Gashuunsukhait routes -- is another issue altogether.

Why did the Constitutional Court find the resolution unconstitutional? MP Ya.Sodbaatar, who represented Parliament before it, told the Legal Standing Committee that gauge width was not an issue before the court which examined the Resolution on the basis of the petition which had emphasized procedural lapses rather than the nature of its content, including the gauge. He said that the Court had noted that a Minister’s signature was missing, making the document infructuous, and that he had told it that Parliament should have noted this but it was basically the Government’s job to do this before presenting any Resolution to Parliament.  Resolution #64 was approved when the Government was changing, and the attendant admimistrative disorganisation could be why the need to have the Ministerial signature was overlooked. However, this can only be an explanation and the Court did not accept it as an excuse, ruling that the procedural lapse had made the Resolution unconstitutional, thereby making several decisions related to the State policy on railway transport void. This means the Tavantoltoi-Gashuursukhait railroad will be constructed with the normal Mongolian gauge width of 1,520 mm.

There is a catch, however. A new Government was established after the Resolution had been passed by Parliament. Now, Article 4.1.2 of The State Policy on Railway Transport says, “Gauge width of prospective railroads in Mongolia shall be 1,520 mm in case they merge with or cross active railroads to ensure national economic security… The gauge width of railway lines for export transportation of mineral products from the mining processing plant to a border crossing shall be approved by the Parliament as presented by the Government.” This second part was the justification for changing the gauge of the Tavantolgoi-Gashuunsukhait railroad.  Since the new Government did not send anything to Parliament and the Court has ruled what the outgoing Government had sent was legally flawed, the general impression is that the TT-GS railway must then have the width set out in the article quoted above. But this can be disputed as that width would apply to tracks that “merge with or cross active railroads”, and the only such merger or crossing likely in the case of the Tavantolgoi-Gashuunsukhait railroad is with the planned Tavantolgoi-Zuunbayan railroad, which cannot be termed ‘active’ as it is still under construction. This would negate the obligation to have the 1,520-mm gauge for the TT-GS railway.
At the meeting of the Legal Standing Committee held after the court ruling, MP Ts. Munkh-Orgil pleaded against acting in haste, and proposed that the final decision be left to the post-election Government. The issue, he said, was “too critical for Mongolia’s development” to be decided without extensive and careful consideration of its various aspects. He wanted to know what the related Ministries thought about what China’s reaction would be to a shift to a gauge that is different from what it has. Will China accept a system where all the Mongolian coal it buys would need to be unloaded from a Mongolian train at the border and reloaded on a Chinese train, thereby turning much of it into dust? The TT-GS railway is being built to facilitate increased export of coal and the new decision on the gauge could very well go against that.

Munkh-Orgil said this railroad would be used for 50-60 years and will significantly increase export revenue, so there was no hurry to take a decision on the gauge.
It is strange that the gauge issue was not decided before construction began, or in the seven years since then. According to official data, 51.8 percent of the lower structure of the railroad, 86.6 percent of the earth work and 52 percent of the bridge and channel work were completed in 2013-2015 when work was discontinued. However, there has been no audit to verify these claims, even when in many other cases audits and investigations have revealed many inflated claims and expenses and have led to punishments for those responsible. Does the state apply its will selectively? Much of the work was financed with $280 million from the Chinggis Bond and the interest on this will have to be repaid by 2022. How was it that so much money was spent without proper study beforehand and monitoring afterward?
And the cavalier approach continues. When construction of the TT-GS railway was resumed after five years the job was given to Bodi International, a subsidiary of Golomt Bank with no previous experience of railway construction. And it is working without any feasibility study. Bodi has made tall claims about how fast work would progress, but few take these seriously. The earthwork has lost its strength because of disuse and lack of maintenance, and there has not been any news on what is to be done about the 10-km empty stretch that would lie between the end points of the two countries’ tracks.

It is interesting that as Mongolia steps back from aligning its coal export railway’s tracks with those of its almost sole customer China’s, Russia, which also uses the gauge we have in Mongolia,  is constructing narrower-gauge railroad networks to increase its raw material export to China. For instance, the Makhalino-Hunchun railroad is being modified into a dual gauge system, to allow movement of 60 million tonnes of cross-border freight. The same is being done on the Grodekovo-Suifenhe railroad to increase its carrying capacity to 20 million tonnes. Both railroads are part of the Primore-2 international freight corridor, which Russia wants to be used to move freight from northeast China to the Asia-Pacific market.

In the last five years, 60 million tonnes of coal have been exported through the Gashuunsukhait border. The cost of transporting this amount of coal has been $1.2 billion, and would have been $780 million less if we had a railway, an amount equal to the cost of building a railway. We lost a golden opportunity to build the railway between 2010 and 2013 and it is so unfortunate that even today, erratic and ill-considered Government policies and decisions continue to stall the progress of our vital economic projects. The ground reality is that our mining products have a market in China, while third countries are an exciting dream. But we seem to be more keen to build railroads to reach these unidentified third markets than to develop direct rail links with our major, and often sole market, China. Such lopsided priorities affect all Mongolians.