With commodity prices rising, recovery is quite possible 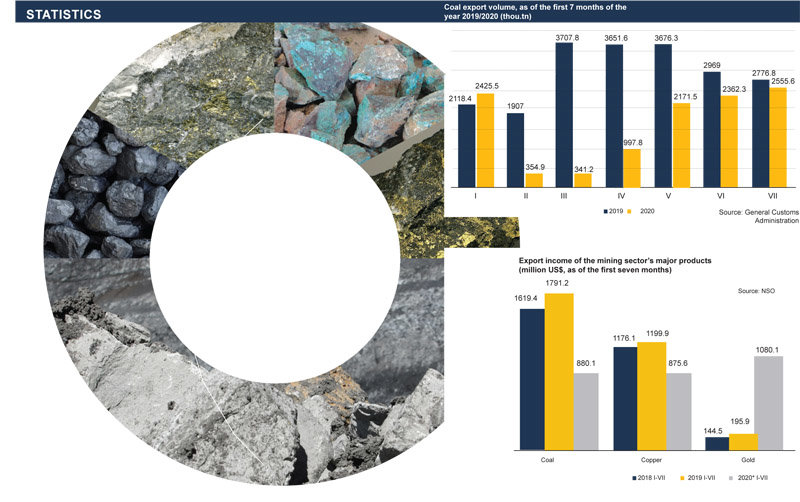 With Parliament approving amendments to this year’s budget on August 28, the four months remaining of the year would be given to arresting, if not undoing, the damage the pandemic has been causing to the economy. Revenue is already MNT1.2 trillion less than expected and the budget deficit up to the end of June stood at MNT2.1 trillion, which had been estimated as the figure for the whole year. However, not all is lost. Rising mineral prices hold out hope that recovery is possible sooner than it seemed possible at one stage.

With an estimated revenue of MNT9.7309 trillion and projected expenses of MNT14.5775 trillion -- 25.2 percent and 37.7 percent respectively of GDP -- the revised budget shows a deficit of MNT4.8466 trillion or 12.5 percent of GDP, instead of the 5.1 percent in the original. This is obviously very high, and several drastic measures would be taken to see that revenue reaches the required level. For example, both Erdenet Mining Corporation and Erdenes Tavan Tolgoi would pay this year’s taxes in advance. It is the rise in mineral commodity prices, however, that would help the Government to reach, and maybe exceed, the revenue target.

The pandemic is hobbling the global economy, with no country exempt from its ill effects. Small and developing countries have been hit the hardest, for they do not have much of a cushion. Mongolia is usually faulted for being over-reliant on its mineral sector but this might now be its savior, given that commodity prices are rising, particularly those of gold and copper, two of its major export earners. Indeed, the price of gold reached a record high in early August.

Coal export is right now a long way from its usual level, but things are getting better by the day, and though gold has earned the most, around $1 billion, in export revenue in the first seven months of the year, the end of 2020 could very well see copper or coal or both overtaking it or at least getting close in terms of export earning. Copper price was $4600/t in late March, but rose to $6700/t in August. Three factors were behind this: China has been buying more, supply from major miners in South America has been disrupted, and the copper inventory at the London Metal Exchange reached its lowest since 2006. The revised budget puts copper price at $6400/t and anything higher than that would make the Finance Minister happy. And prices could very well keep rising, as they did ten years ago.
The revised budget makes it clear that the government expects coal to recover much of the ground it has lost so far this year. Truck movement at the border has shown great improvement since “Green gateway” regulations were put into force in August. Supply, however, is only one part of trade. How much we earn from coal export will also depend on the extent of demand in China.  Nevertheless, recent indications have been certainly positive. 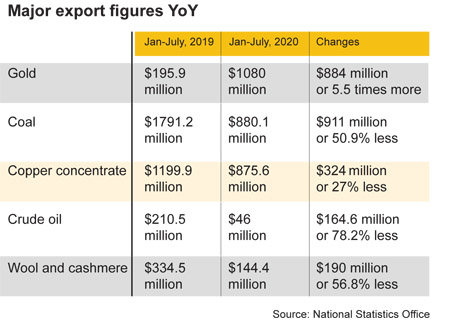 The somewhat dramatic surge in gold export has kept the situation from looking bleaker but this comes at a cost. More gold export means Mongolbank is left with less gold. According to the IMF, the central bank’s gold holdings were 20.07 tonnes in May, 17.73 tonnes in June, and 11.58 tonnes in July. This has several economic implications.

These macro-economic indicators aside, how has daily life been impacted by the economic downturn? According to the National Statistics Office, the first half of the year showed both retail and wholesale trade contracting. Retail sales totalled MNT5.2 trillion, which is MNT796.8 billion or 13.3 percent less YoY, while wholesale trade stood at MNT5.8 trillion, MNT396.4 billion or 6.4 percent less YoY.
That Ch. Khurelbaatar is Minister of Finance in the new government also must have helped in making the revisions to the budget, as he knew very well what changes were needed. It is also interesting to see how he has retained his faith in the capacity of coal exports to boost revenue. If, as the revised budget says, 27 million tonnes of coal is exported in the second half of the year, it will be a record for any half-year ever. We shall not have to wait long to see if he was pragmatic or over-optimistic.

A feature of the revised budget is that while it has brought down the revenue estimate by MNT2.17 trillion, it has  increased expenditure by MNT705 billion, thus allowing the deficit to shoot up. The Minister has justified his move by insisting that in the present situation it is imperative to protect the people, and has exercised his “legal protection” right to ignore the deficit limits in the Fiscal Stability Law. 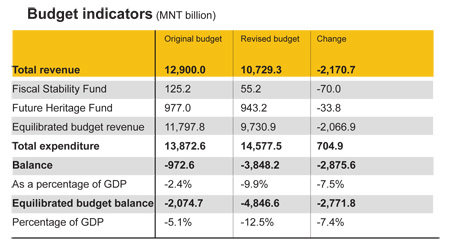 One contributory factor behind the rise in expenditure is the interest payments on government debt that now stands at 62.2% of GDP, 8% more than earlier estimated, the rise being the result of the depreciation of the MNT against USD, domestic sovereign bond sales, and fresh loans for programmes. The amended budget puts this year’s GDP at MNT38.7 trillion, as against the MNT40.7 trillion in the original 2020 budget. The Ministry says government debt is still under the legally permissible limit and that its percentage of GDP would fall from this year’s 62.2% to 58.4% in 2021 and 54.4% in 2022. Incidentally, reacting to concern in the media, Mongolbank has clarified that there would be no problem in refinancing the debts when they mature as the Mongolian government enjoys a relatively stable credit rating. 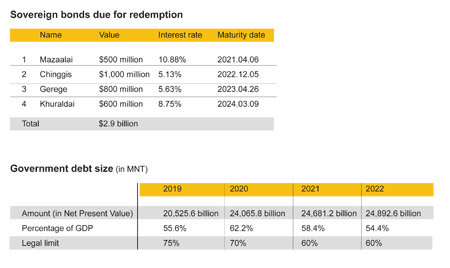 According to the 2020 Fiscal Framework Statement, GDP is projected to drop by 1% this year, but will grow in the coming years. The government has said it will work to achieve 6% growth. Similarly, the budget deficit increases sharply this year, but will decrease significantly next year, according to the budget forecast for 2021-2022. Budgeted expenses are expected to decline significantly in the next two years to keep the deficit low.

The amended budget projects that full-year revenue from the mining sector would be 26% of the total budget revenue, but at MNT2.7 trillion, it would be 15.6% or MNT498 billion less than the originally estimated MNT3.19 trillion. The revised revenue is achievable only if 27 million tonnes of coal is exported in the second half of the year. This works out to  4.5 million tonnes per month, while the most coal that Mongolia ever exported in a month was a little over 4 million tonnes in August 2019. Repeating that feat is theoretically not impossible but that would require more than 2,000 coal trucks to cross the border every day in the coming months
The country’s total exports are now expected to reach $6.1 billion, 20% less than the $7.6 billion in 2019. Imports are expected to total $5.6 billion this year, down from $6.1 billion last year. The decrease is mainly because the pandemic-induced economic inactivity has meant less demand for machinery, equipment, construction materials and fuel. Total foreign trade is thus expected to reach $11.7 billion this year and the foreign trade balance to reach $520 million. However, foreign trade turnover in 2021 is expected to surpass the 2019 level. 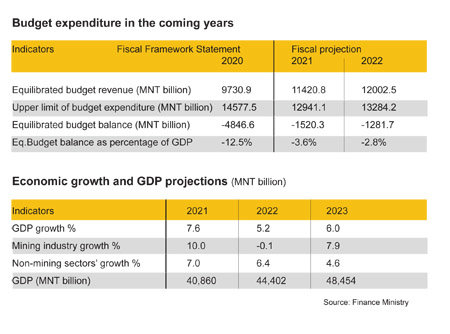 There are several positive signs that the long-term outlook for the economy is good. For this we shall need a total and consistent recovery of the Chinese economy, which would mean a growth in its demand for raw materials, and there should also be no covid-related case in Mongolia, The oil refinery is coming up, railway construction projects are progressing, construction of the water treatment plant in UB is ready to take off, and the construction sector is raring to go. Once the uncertainties generated by the pandemic disappear, Mongolia cannot but stride forward to a future of steady growth.