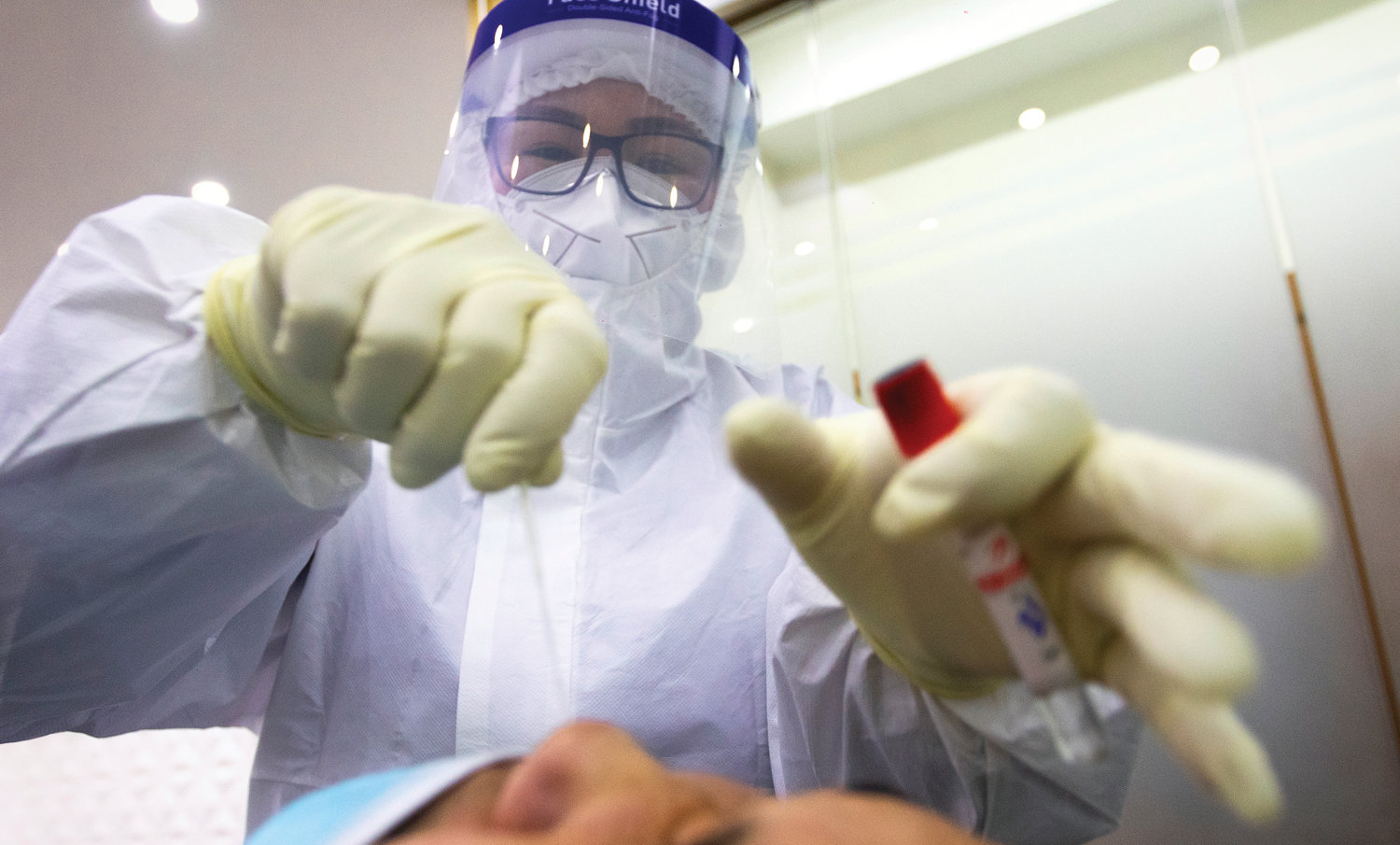 The year that has just ended was one that changed the way we live anywhere in the world. A pandemic held human interaction hostage and stalled economic progress, and no one can say how long it would take to undo the damage. Mongolia has not been exempt from the disruption in all areas of life, with exports and revenue falling, but our sparse and widely distributed population, helped by strict Government measures, has kept the number of casualties low. Hope springs eternal in the human breast, and as we begin a new year, Mongolians, individually and collectively, look forward to an end of the crisis and to new opportunities opening up.

The difficult times have once again shown to us how dependent the Mongolian economy is on the mineral sector. That awareness and the imperative to carry on exporting have led mining operations to continue without interruption, with miners working round the clock even as much of the rest of the country is under a lockdown. Mining companies have responded positively to the Government’s call on them to meet their social obligations. Erdenet Mining Corporation would reimburse the Government MNT650 billion, which is the amount it stands to lose by releasing  households and businesses from paying their energy, water and heating bills, and Erdenes Tavantolgoi would give MNT69 billion, which is equivalent to the 75 percent discount on the fuel costs for households in the ger district of Ulaanbaatar. Energy Resources has been providing free coal to these households. It is not that such support has not been sought and received previously. Salkhit Silver has agreed to pay for all the money banks have lost by cancelling pension-backed loans, while Erdenes Tavantolgoi is financing the construction of two railways of national importance. To these must be added the various ways in which mining companies aid and support local communities. As we all know, the mining sector alone accounts for 25 percent of our GDP, 72 percent of our industrial output, 90 percent of our export, and 75 percent of our direct foreign investment. As such, every household in Mongolia receives, directly or indirectly, some monetary benefit from the mining sector.

While most major economies have been felled by the pandemic, China’s has continued to grow, much to Mongolia’s advantage. Its prompt and resolute measures against the pandemic, and adoption and implementation of policies regardless of their cost, have allowed China to come out of economic crisis quickly. Even though large-scale infections from the virus were first detected there, over the months all major cities have had the lockdown lifted, and work at mines, industrial plants, universities, and in the service sectors have returned to normal. All in all, life in China is now much as it was before the pandemic. Restored consumer demand has revived domestic trading and final growth indicators are close to the 2019 figures. China’s exports reached $268 billion in November – the highest ever. As the Government works to push up consumer demand and purchasing power, President Xi Jinping has made it clear that the struggle against COVID-19 would not be at the cost of the ongoing efforts at poverty reduction. Thus China continues to invest heavily in sectors such as infrastructure, construction and industry, which provide jobs in large numbers. ADB has forecast that China’s economic growth in 2021 would be higher than in the pre-pandemic period, while the World Bank and the IMF have put the growth rate at 7.9 percent and 8.2 percent respectively.

All this concerns Mongolia as China’s industrial progress would mean an increased demand for raw material there. Apart from that, the price of Mongolia’s major export products have also been rising. Copper price at London Metal Market was $8000 on December 18, the highest in the last seven years.

This is not unexpected as increased production of electric cars and batteries leads to more demand for copper and to its price going up. The digital transformation and also the social isolation enforced by the pandemic have meant a rise in demand for things like computers and mobile phones, which has also given a push to the copper market. Goldman Sachs expects the price of copper to reach $9500 this year. Interestingly, copper’s perceived antibacterial properties could see its wider use in the health sector. Robert Friedland of Turquoise Hill said at PDAC-2020 that he expected more use of copper not only in furniture and other items in hospitals, but also in ships, airports and fitness centres. Denying that he was being too optimistic, Friedland insisted that the world would face a shortage of copper, as existing copper deposits get exhausted and not enough new ones are discovered. Craig Lang, analyst at CRU Group, agrees. His assumption is that copper shortage would begin to be felt from 2023 and its price would rise drastically. This coincides with the start of production at the Oyutolgoi underground mine and thus will allow Mongolia to hold a dominant position in the world’s copper market. Things would be even better if the Tsagaan Suvarga deposit is commissioned before or around then.

Things also look bright for Mongolia’s coking coal.  Significant changes were made in the coking coal import structure of China in October and imports from Australia, the largest supplier then, were reduced drastically. It was reported in official Chinese media that the National Development and Innovation Committee had allowed 10 major domestic energy companies to buy as much as they needed from Mongolia, Indonesia and Russia to make up for the loss. In 2019, China imported 30.9 million tonnes of coking coal from Australia, and now this would be reduced by almost 50 percent, which opens up opportunities for Mongolia. However, it would be better if the coal is washed and processed to meet the environmental standards of railway transport in China. The need right now is to ensure quicker crossing at border points, despite pandemic-related restrictions, but the Chinese limits on entry of Australian coal is a big chance for Mongolia to show that it can meet increased demand in China for coal of good quality. The prospects look bright as the price of Mongolian raw coking coal at the Gantsmod border increased by 12 percent on December 17, while that of washed coal was obviously higher.

Mongolia earned less from copper and coal export in 2020, but a rise in gold price covered the shortfall. With the price rising by 25 percent over 2020, the gold industry earned $1 billion for the first time. In the first 11 months of 2020, export amounted to 28 tonnes and income $1.62 billion. Citigroup and Goldman Sachs analysts assume that in 2021, gold price would be more than $2000 per ounce, so our gold sector may well be worth $2 billion. There is much scope for foreign investment in this sector, for example, in projects like Bayan Khundii and Altan Nar that are being implemented by Erdene Resource Development, and Altan Tsagaan Ovoo and Naran Mandal Hard Rock Deposits being developed by Steppe Gold.

Next in export income is iron ore. Since, unlike most other export metals or minerals, this is moved on railways, so its transport across the border was not interrupted by the pandemic regulations. Its price also reached the highest in nine years. On December 21, the price of iron ore with content of 62 percent was $176.9/t at the Dalian exchange, the most since February, 2011. There is a likelihood that the world’s largest iron ore producers would reduce output despite global demand, especially in China, being high. That would certainly raise prices, with Jefferies Financial Group expecting it to be between $180 and $200 per dry metric tonne in the first quarter of 2021. Many analysts see a return to the situation in 2000 when rising demand in China increased the price of mineral resources and started a super cycle. Indeed, Jeff Currie of Goldman Sachs thinks the super cycle is all set to start. During the peak period of the super cycle or 2009-2012, Mongolia was hailed as the second Kuwait, with many firsts for foreign investors leading to double-digit economic growth. A repeat is just what we need after the disappointments of 2020.

International analysts have noted that traditional sectors such as mining continue to interest investors. The US Government will spend $900 billion on boosting its economy, and this would have a positive impact on the fortunes of big mining companies there. Besides, if savings products in developed countries continue to yield low returns, investment tools such as higher-interest bonds issues by countries such as Mongolia would become more attractive. Mongolia lies next to the world’s industrial hub which is also the biggest consumer of raw materials, and this geographical location is an asset in the calculation of investors. This should be favourable to us and we must do everything we can to attract international investment in our mining sector.

All the bad news in 2020 made us overlook the signing of an agreement between Xanadu Mines and the Japan Oil, Gas and Metals National Corporation that would allow $7.2 million to be spent on exploration in the Ulaan Uul Project area. Au$1.12 million has been promised for exploration in the Kharmagtai project, and Errick Sprott, a Canadian, has made an investment of $15 million in Erdene  Resource Development. All this could well be a prelude to setting up a larger investment canvas.

The pandemic restrictions have put us in an “abstract” world, where we learn and work online, amuse ourselves “virtually”, operate equipment without going near it, and pay with intangible money. Going and being digital is now an integral part of everything from politics to economy to social and business life. The traditional style of trade and communications is passe. Microsoft CEO Satya Nadella thinks we saw two years of digital transformation in just two months. This transformation has been given the name Covidtech.

All this opens up new opportunities for our country and people. For example, travel restrictions have kept many foreigners from taking up their assignment here, giving a chance to Mongolian professionals to improve their skills and qualifications. Some complicated construction work on the underground mine at Oyutolgoi Project have been done remotely or online by foreign specialists but executed on the ground by Mongolians. Chris Aitchison, Director of the Underground Project, has noted that without this application of local skills, the progress of the work would have been much slower.  Another example is the welding process of Pandrol of the UK that is used in construction of the Tavantolgoi-Gashuunsukhait railway. The British specialists could not come but the work could not be delayed indefinitely, so 20 Mongolian welders were trained online by Pandrol staff and they have been doing the job with total competence. Young Mongolians must acquire skills which will be valued globally. And we must enter fields other than mining. There is news that a Mongolian technological company has set foot in Silicon Valley.

The quarantine has made it clear that some jobs would now be performed remotely, and use of technology would change the way some things are done. Will jobs then become fewer? The overall labour market might not contract much as new kinds of work would be needed. The nature of jobs would change more than their number. Digitalization does not respect national boundaries, but it is for Mongolians to benefit from this and “work” with any company around the world, never leaving home.