Last year was not good for Mongolian coal, with exports earning almost $1 billion less than in 2019. This year, too, exports are not expected to top the 28.6 million tonnes in 2020, which was the lowest since 2017, when the figure stood at 33.4 million tonnes.
According to the National Statistics Office, the total revenue from mineral exports in 2020 was $5.26 billion, down 17.6 percent from the previous year, mainly because of the decline in coal exports. The loss to the country would have been greater if gold had not come to the rescue. The more than 30 tonnes sold by The Bank of Mongolia earned around $1.8 billion, offsetting the loss from coal`s underperformance. However, gold is unlikely to repeat its feat in 2021. In any case, of the 30 tonnes exported last year, only 23.6 tonnes had been bought by the central bank during the year, the rest comong from its reserves. 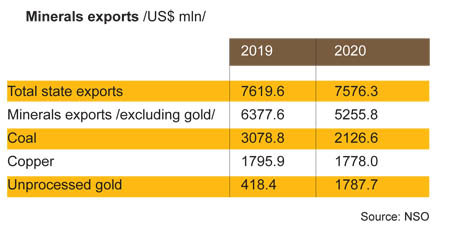 It is too early to make any informed guess about this year`s coal exports as much depends on the course the pandemic will take, either in Mongolia or in China. Things do not look so good at the moment of writing though news from the border is encouraging. The number of coal trucks passing through Gashuunsukhait-Gantsmod has increased to 500 per day since January 21, up from an average of 300 a day at the beginning of the year. If this continues, exports are likely to reach 30 million tonnes. However, the Ministry of Finance is sticking to the 42 million tonnes in the 2021 budget.

A more reliable source of optmism is that revenue from sale of Oyu Tolgoi copper concentrate will go up because there will be more gold in it. That increase could ensure that even if coal and gold disappoint, the country’s total export revenue will not decrease alarmingly.
The gold content aside, copper as such should be a steady earner this year. Its price topped $8,000 per tonne at the London Metal Exchange in the beginning of the year, the highest since 2013. Then came news of fresh COVID-19 cases in China, which accounts for half the global copper demand, and prices fell below‘ $8,000/t on January 20. Most analysts, however, are upbeat. They expect the global economy to recover rapidly once large-scale vaccination halts the spread of the pandemic. The weakening of the dollar, as seen at present, would also contribute to a rise in  copper prices. Following national elections in major copper producing countries like Chile and Peru, copper production should increase. So would the supply of scrap copper.  But with inventories low at present there could still be a shortage and market watchers are saying copper prices could be around $9,500/t in the fourth quarter. There are imponderables and unknown risks, but this seems a fair enough expectation.

This year`s guidance from Oyu Tolgoi is that it will produce 160,000-180,000 tonnes of copper, with 500,000-550,000  ounces of gold in the concentrate. In 2020, the mine produced around 150,000 tonnes of copper and about 182,000 ounces of gold, and the sharp increase in the latter has led S&P Global Market Intelligence to put Oyu Tolgoi sales this year to more than $2 billion, almost double the amount in 2020.
Last year, Mongolia’s copper concentrate export revenue was $1.78 billion, 0.99% less than in 2019. One reason for the drop was that there was less gold in the Oyu Tolgoi concentrate. Things evened out as copper prices started rising from the middle of the year and has stayed high until now. The result has been that copper export revenue  in the first half of January stood at $86.5 million, 45% more than in the same period in 2020.

Coking coal prices likely to remain stable, but those of iron ore would fall

China stopped the import of Australian coal of any kind in October and this is likely to continue. Chinese steelmakers are hungry for good quality coal and the Government there is trying to fill their appetite by buying more coal from Indonesia, Russia, South Africa and Mongolia. That could be a break for us. Prices have been rising for some time in China’s Baotou region, one of the major markets for Mongolian coal. Thus, even if we do not sell more, our coal export revenue should increase, or at least remain stable.

China has not been so rigid about buying iron ore from Australia which it continues to import as before, simply because unlike coal, there are no other easy sources. Iron ore prices rose sharply last year to close to $170/t. This was surely good for Mongolia’s export earnings. Mongolia ended 2020 with iron ore exports reaching 8.2 million tonnes, but even when this was 2.9% less than in 2019, revenue increased by 11% to $640 million. Between January 1 and 15, 2021, Mongolia exported 325,700 tonnes of iron ore and earned $34.3 million, a decrease of 16.4% in volume, but 31% more in value YoY.

Gold producers smiled in 2020, with prices hitting a record high in August by topping $2,000/oz. Mongolia made the most of the situation by selling 30.5 tonnes and getting $1.79 billion from it, according to the General Administration of Customs. In particular, Gold export accounted for 23.6% of Mongolia’s total exports in 2020, and only coal earned more.
Whenever there is economic uncertainty, gold prices rise. Conversely, with the pandemic expected to reede, gold prices should gradually fall this year, but the reality could be a little different, at least according to some analysts.

For example, Goldman Sachs expects gold to hit $2,300/oz this year, arguing that inflation will follow the expected recovery, and that would keep gold prices high. Many others agree but some are more restrained and see prices hovering around $1,900/oz. They expect the economic recovery to be rapid, lessening the appeal of gold as a safe investment. Whoever comes right, it is ulikely that there would be any drastic fall in gold prices this year.