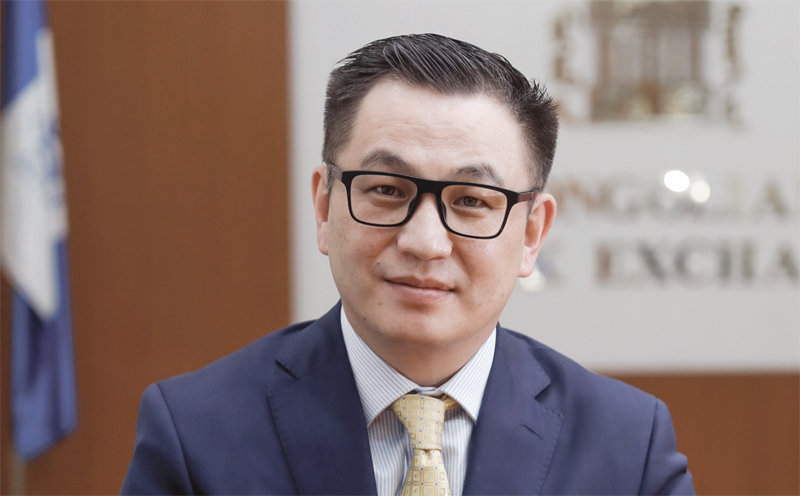 Kh. Altai, Executive Director of the Mongolian Stock Exchange (MSE), tells L. Nomintsetseg that the MSE is expecting exciting times with dual listings and bank IPOs, and how these developments would boost the national economy.

The TOP-20 index has been updated and the stock market value has reached MNT3.5 trillion. What has led the MSE to such life and growth?
Several factors are behind the MSE being so active since the beginning of the new year. Banks have lowered their interest rate on savings with them, thereby pushing citizens and companies to look for new places where their investments will earn better returns. Some of this money has been put into the stock market and this has kept us busy. Also, most commercial banks will become public ones, and this means a lot of preparatory work for us, but, of course, before they offer their shares to the general investor, their accounts and balance sheets have to be properly audited and their credit ratings done by international agencies.

Many companies are expressing their interest in going public. Do you see large mining companies, for example, Oyu Tolgoi, Energy Resources, Xanadu Mines and Aspire Mining getting listed on the MSE any time soon?
All big mining projects in Mongolia are run by either shareholding or state-owned companies. Those in the first category, such as Oyu Tolgoi and Energy Resources, raise funds at foreign stock markets and are unlikely to ask for listing on the MSE. However, some companies such as MMC and Turquoise Resources, the 66 percent owner of Oyu Tolgoi, can do so in future.

Double or dual listing has been legally possible since 2013, though it was only in 2017 that detailed regulations and procedures were laid down. As you know, in 2018, Erdene Resource Development Corporation was double listed on the MSE and significant progress has been made in the trade in its shares. For example, the shares are convertible, meaning that what has been bought on the MSE can be sold at TSE and vice versa. Such easy convertibility should make double listing attractive for the big companies now listed only abroad. Our own regulations also encourage companies to go for double listing. For example, companies wishing to be dual listed would have easier criteria for getting registered on the MSE, and would continue to be bound only by the rules of the exchange where they were first listed and by the laws of the country where they were established. We would also accept audit and other similar reports prepared outside Mongolia, provided the work is done by authorised companies. We now have double listing arrangements with 26 foreign exchanges.

Do you expect more countries to follow Erdene Resource in opting for double listing?
Right now, we have Steppe Gold as the second company all set to be dual listed. More should come, giving Mongolians the chance to buy with Mongolian currency shares of companies implementing significant projects here and enjoy the benefits of growth in share prices and getting dividends. It will be a win-win situation. For the companies, having more local shareholders would give them more political influence and lower risks, while for Mongolia, more citizens as shareholders would mean more national awareness of how mining works in general, and also more control on how specific projects are implemented.

What new products are being offered by the MSE?
Domestic investors prefer to hold shares in large and established companies. That way, shares of some banks will be in high demand. They should interest foreign investors, too.

Do you have a break-up of your investors, in terms of nationality and also of individuals and companies?
As of 2020, 54 percent of the total investors were domestic and foreign companies and 12.5 percent were foreign citizens. Incidentally, pension funds have a large presence in foreign stock markets but we do not have any private pension funds in Mongolia. We should expedite our pension reforms and allow private pension funds. This would be good for not just the stock market but also for citizens. Individual savings can be used for higher returns only if they invested in such funds which trade on the stock market. The national economy will grow only with expansion of the stock market, and our companies will grow bigger.

Do we have investment funds, foreign or domestic, here? And do we have a situation where we can have them?
The job of investment funds is to prudently manage the usually small deposits made in them by mostly individuals. The funds decide how best these can be invested to give good returns to the depositors. There was no such fund on the MSE until last year, when the National Privatization Fund was registered. We hope this will be followed by many others. That will improve liquidity of the stock market and give us the opportunity to offer more new products.
I was a member of the working group that drafted the Law on Investment Funds. It was passed in 2013, but is yet to be effectively implemented. Its rules and procedures have to be updated, and more tax-saving incentives have to be offered to corporate investors.

Tell us about the Erdenes Tavantolgoi JSC proposal for issuing bonds worth MNT2 trillion. That would surely be the biggest offer yet for the MSE to handle, no?
That is true, but what is more exciting is that a part of it would be issued in foreign currency. As I understand, the company would use the money to develop infrastructure and also on other work that would increase the commercial value of the project. All citizens of Mongolia own shares in the company but they cannot trade these. This restriction has to be lifted without delay by the company’s Board of Directors and the Government, as such trade on the domestic stock exchange would lead to raising more capital when there is dual listing on a foreign stock exchange.