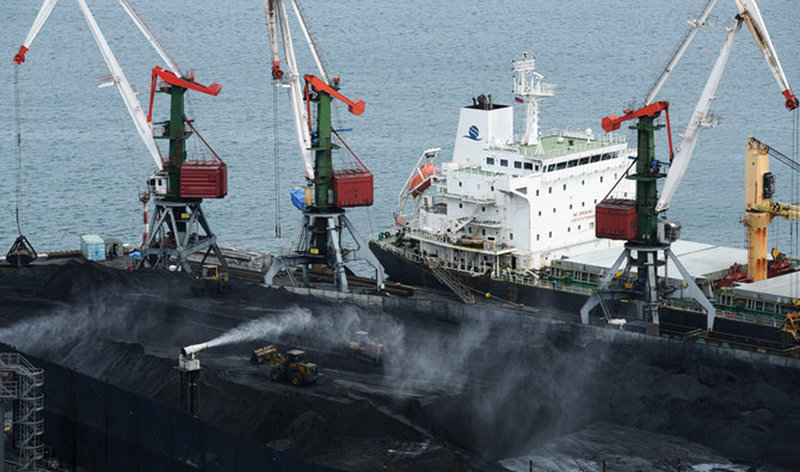 While China barred the import of Australian coking coal, an interesting competition was on to fill the large space thus left vacant in the Chinese market, the world’s largest. Data from December, 2020 show China imported no coking coal at all from Australia, 1.5 million tonnes from Mongolia, and 1.1 million tonnes from Russia, some 700,000 tonnes more than the monthly average. A China-based coal news agency, Today Think Thank, has wondered if Australian coal entered China through a third country. Even with the year-end ban, figures for 2020 as a whole show that Australia was the major coking coal exporter to China, accounting for 35.5 million tonnes or more than half of China’s total import of this major component of steel manufacture.  The ban is unlikely to be lifted in the first quarter of the year, though in January China did allow some ships carrying Australian coking coal that were stuck in ports to unload their cargo.

Despite the pandemic, the Chinese coking coal market continued to grow in 2020, with consumption reaching 591 million tonnes, of which 72.5 million tonnes were imported. Both figures are likely to go up this year, even if by not much. Domestic production is projected to grow 3.3 percent and reach 1.191 billion tonnes. J. Zoljargal, Executive Director of the Mongol Coal Association, notes that the cost of production is high in China as the coal is extracted mostly from underground mines, so China will not use its own coal to meet the shortfall resulting from the absence of Australian coal. Instead, it would import more from other countries. China’s total coal import is expected to be about 300 million tonnes this year, of which the share of coking coal would be 75 million tonnes.

As far as coking coal is concerned, Today Think Thank forecasts that 33-37 million tonnes will be imported from Mongolia, as against last year’s final figure of 23.8 million tonnes. Both this and the forecast are lower than Mongolia’s own projection. Even though we failed to reach the declared goal of 42 million tonnes in both 2019 and 2020, this is the same figure in this year’s budget, too. The general feeling is that if the budget is not amended to be more realistic, we shall end 2021 with export earning less than projected, as happened in the last two years. Taking all types of coal together, last year’s extraction target was 92 million tonnes and the export target 69 million tonnes. Performance stood at less than half of both. On paper, the time was favourable for Mongolia to sell more to China which was not buying from its largest supplier, but Mongolia ended up with 20 percent less exported than in the year before.

China imports coking coal from Mongolia through Gantsmod, Ceke, Mandal, Erlian and Takeshiken border crossing points, though the Ulziit port bordering with Umnugovi aimag was opened for a temporary period on December 22, 2020. Some 94 percent of the total trade passes through the Gashuunsukhait-Gantsmod and Shiveekhuren-Ceke crossing points. Last September saw the highest volume of trade in a month since 2018, with 2.4m tonnes of coal crossing the border at Gantsmod and 1.72m tonnes more doing the same at Ceke. The maximum annual handling capacity at these two points is 50 million tonnes.

That this was possible only when the Green Gateway regulations were tried out for a limited period shows what can be achieved if there is cooperation at the government level and also through full utilization of capacity. Chinese participants told an online meeting organized by the Mongolian Coal Association last year that China had the facilities to bring in 50 million tonnes of coal through Gantsmod, 30 million tonnes each through Ceke and Mandal and another 15 million tonnes through Erlian. There is obviously no question of China actually buying so much coal from Mongolia but their point was that the infrastructure on the Mongolian side was not developed enough to handle sizable volumes of export. Chinese representatives at another meeting were more specific, calling on Mongolia to pay attention to increasing capacity, developing infrastructure, and streamlining the work system at its border points if it wanted to take full advantage of the demand in China.

Chinese importers of Australian coal have indicated their readiness to change to coal from Mongolia but only if it reaches them through Gantsmod and Mandal, the ports nearest Tavantolgoi and also close to the metallurgical plants in Shandong and Bugat. Demand for Mongolian coal will remain high not just because there is no coal from Australia but also because of its own quality. However, buyers want to be sure of getting regular supply of good-grade coal. It is both interesting and frustrating that even when 60 percent of Mongolia’s coking coal export last year was through Gantsmod, it is not formally an international border point, as its administration is the responsibility of Bayannuur province of the Autonomous Region of Inner Mongolia, and not of the national government.

Though nothing came of some talk last year that the Chinese province would require 20 percent of the coal from Mongolia to come in a raw form, the demand is likely to resurface as two new coal washing plants come up in Bayannuur. That might affect the viability of the planned similar plant at Tavantolgoi. A newly established plant with capacity to wash two million tonnes of coal per year in Urad Middle Banner in Bayannuur signed an agreement with Erdenes Tavantolgoi in March 2020 under which it has been buying raw coal from there since June. This means Mongolia is forced to sell raw coal for less money, allowing companies in China to add value to it.

Importers prefer this as at the moment Mongolia does not produce enough value-added coking coal that they can sell straight to metallurgical plants. Energy Resources, a private company, is the only concern to wash some of its coal here and sell it directly to Chinese plants without going through middlemen buyers at Gashuunsukhait.  The Energy Resources plant has an annual capacity of 15 million tonnes but at the moment it washes just 4 million tonnes.

Accepting any precondition to sell raw coal if we are to be allowed to export more through Gashuunsukhait is not a good idea. Mongolia must increase its coal export revenue by selling value-added products at a higher price, and not by selling more raw coal that goes cheap. The state must help in setting up processing facilities. The volume of coal exported would certainly rise once the railway is ready, most likely in the first half of 2020, but the real rise in revenue should come from selling processed coking coal.
The rising demand in China for Mongolian coal to make up for the absence of Australian coal has shifted some of the export traffic to the Mandal border point. Mongolia exports less than 700,000 tonnes of coal through the Khangi border point which is the closest to metallurgical clusters in the vicinity of Bugat which have so far used coal from Australia, with one steel plant alone consuming 6 million tonnes. Given the cheaper costs of transporting Tavantolgoi coal to the border at Mandal, it is essential to develop the facilities and infrastructure there.

An affiliate of a Chinese state-owned company is currently working under a concession agreement on improving the gravel road from Tavantolgoi to Khangi. This would allow Tavantolgoi coking coal to be loaded on to the Chinese railway network at the Khangi-Mandal border point. This year should also see Mongolia start work on construction of the Zuunbayan-Khangi railway which would transport 15-21 million tonnes of freight.
There are two major obstacles to our exporters being able to fully meet the Chinese demand for Mongolian coking coal in 2021 -- the pandemic and the state of affairs at the major border points. Some feel it would be better to transport coal in containers and late last year the government decided to set up a container shipment station at Shiveekhuren border point. Some Chinese buyers would also try out use of containers without human involvement at the Bulgan-Takeshiken border. The Mongolian Coal Association is optimistic of a successful 2021, and we can only wait and see.
Russia plans and moves ahead

Russia is keen to claim a share in the Chinese market, not just for the time when the ban on coal from Australia is in place, but also beyond that, and coal is the major, but not the only, mineral item it has to offer. In January, it launched export of coal in 20-tonne containers on the railway from the Zabaikalsk region. As Russian coal export to China picks up, maybe at the cost of Mongolia, we are expected to be excited by the news that the natural gas pipeline from Russia to China will pass through the territory of Mongolia. In the first 11 months of 2020, 5.54 million tonnes of coking coal was exported from Russia to China, just 2 percent more than in the same period of the previous year. However, in December, when China did not import any coal from Australia, Russian export was doubled.

Russia has a multi-pronged strategy to increase its coal export to China. Alexey Shilo, Deputy Director of the Russian Railway, has revealed that they are in talks with China on unhindered railway movement with the coal. The Russians already have a railway to the border with Manchuria but now they are building another with the Chinese gauge. The work of laying railway tracks along the bridge on the Amar River should be over in August and then Russia will have two points through which to dispatch its mining products to the northeastern part of China. The speed with which Russia is working on increasing its share of the Chinese market makes one wonder if the railway to Gashuunsukhait, when it is finally ready, will not be a case of too little too late.

The two countries are also likely to discuss how the coal trade can be made tariff-free. President Putin has authorized spending RUB60.5 billion on upgrading the Trans-Siberian and BAM Railways so that their carrying capacity reaches 180 million tonnes in two years’ time. The freight will not be just coal as Russia hopes to export other raw materials also for use in the metallurgical plants in eastern and northeastern China.

Plans are ready to develop several coal projects to improve the competitiveness of their products. Chief among them is the Elga deposit, with reserves matching those at Tavantolgoi. Russia will invest RUB130 billion over the next two years on developing Elga to the point that 45 million tonnes can be annually extracted there. A processing plant will also be built, with annual capacity of 30 million tonnes, and the value-added coal would be taken by rail from the mine site to Ulak and from there to the coal terminal at Vanino port.

Apart from these state projects, a company called Kolmar has revealed its ambition to be a leading coking coal miner in Russia.  It will extract 22 million tonness per year and export 19 million tonnes, mostly to China. Dolguchan which was a part of Kolmar but at present an independent company, hopes to get Japanese funds to set up a plant to wash 1.5 million tonnes of coking coal which would then be supplied to Marubeni, Sojits, Itochu, Sumitomo, and Mitsui – all Japanese companies that were once interested in cooperating with Mongolia to develop Tavantolgoi.

Thinking ahead, long-term planning, setting specific targets, commitment to a goal, and unity of purpose – these have given Russia a clear edge over Mongolia in grabbing the opportunities opened up by China’s ban on importing Australian coking coal. Not all is lost, however. It is now for Mongolia to pull up its socks and make a concerted effort to make the best of what is left.