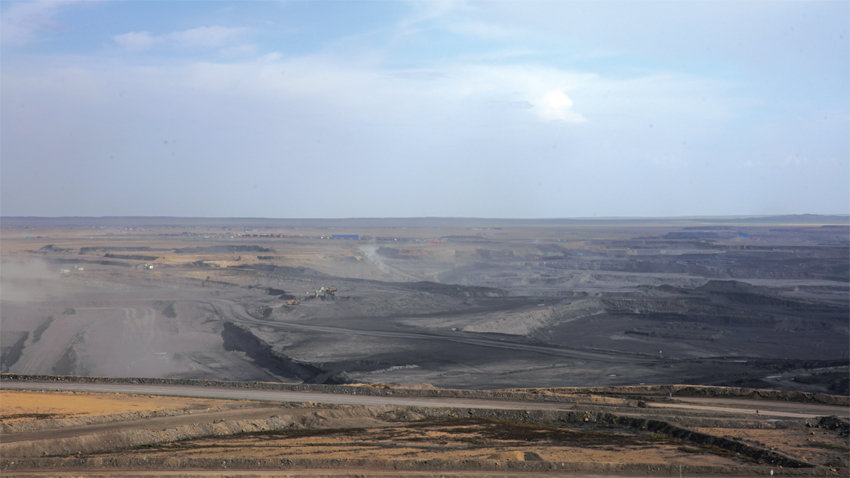 Mongolia’s largest coal producer, Erdenes Tavan Tolgoi, is on the fast track to expand its operations.  If current expansion plans become a reality, they expect to produce 47 million tons of coal annually with projected revenues 10 trillion MNT per year by 2025. This is to be achieved through investments in capital projects over the next five years, worth an estimated 10 trillion MNT.  By ramping up its operations, revenues would grow geometrically, increasing its dividend to investors and revenue to the government (currently 81.5% of the company is state owned and 18.5% by citizens and private investors).  These investments are to be funded from internal revenues, bond issuances and   debt.    By expanding their capacity, ETT aims to take advantage of new market conditions and increase their market share in China. 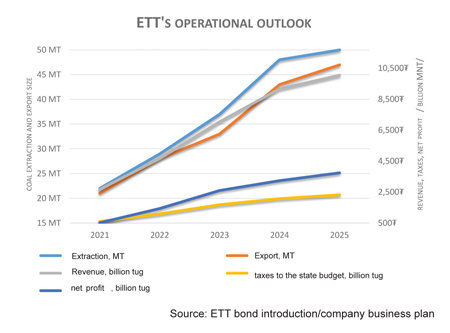 In 2019, ETT exported 15.5 million tons of coal for 2.66 trillion MNT, the best performance year in the company’s history. This contributed 736.1 billion MNT to the state budget and generated 1trillion MNT in net profit.  As a state-owned enterprise, a government profit sharing scheme awarded 2.5 million Mongolian citizens up to 1072 shares each, the result being a milestone dividend payout in 2019 of 179.8 billion MNT, the first in Mongolian history.
But in 2020, coal exports were down 30% due to border closures and restrictions resulting from the global COVID pandemic.   During this period, Erdenes Tavan Tolgoi exported 15.5 million tons of coal earning 1.68 trillion MNT, of which 1.5 trillion MNT was sales revenue. This resulted in a net income decrease of 149.4 billion MNT and a reduced contribution of 490.1 billion MNT to the state budget.

Despite the current uncertainties, the company is moving ahead with some major infrastructure investments. An estimated 2.45 trillion MNT will go into rail, power, and other infrastructure projects, including a feasibility study for a coal processing facility.  Till the of 2020, ETT invested 883 billion MNT in the TT-Zuunbayan railway project, with an additional investment of 100 billion MNT in mid-June of this year.  The company also put in 5.7 billion MNT towards launching the Tavan Tolgoi power plant project. The Tavan Tolgoi Fuel company, a producer of low air pollution coal briquettes sold in Ulaanbaatar, invested an additional 72.5 billion MNT into their production capacity, bringing their total investment to 341.6 billion since 2018.

The corporate debt load has significantly increased due to investments in internal, state, community and social responsibility projects mandated by management and the Mongolian government.   According to the 2020 financial statement, corporate debt reached 2.04 trillion MNT, an increase of 1.69 trillion YoY from 2019.  This debt is expected to increase up to 3.5 trillion MNT by the end of 2021.  Although debt levels have increased, the company is showing much stronger financial performance. With projected increases in market demand, expectations are high that it can be successfully managed.  The key will be on strengthening the company’s position in the Chinese coking coal market and capturing new market share.

To support its increased activity ETT is planning to raise an additional 2 trillion MNT through a series of bond issuances.  The first issuance released between March 30th and April 9th was successful in generating 600 billion MNT, with more to come later this year.  Over the next five years (2025) the company aims to finance a total of 10 trillion MNT in projects by re-investing its internal profits and retained earnings and making up the shortfall through debt and bonds. If market conditions develop as projected, the majority of these capital investments will be supported by corporate revenues. 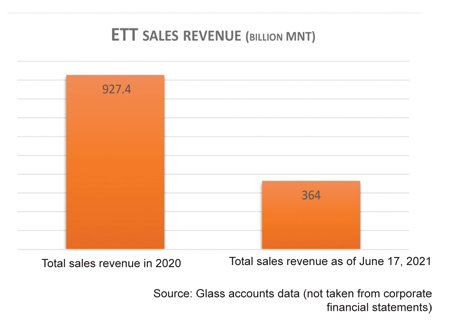 The Glass Account data indicated last years annual sales as 930 billion MNT. According to the corporate statements, ETT generated 1.5 trillion MNT in sales. The discrepancy may be due to only a portion of last year’s sales being registered with the official tracking site. In terms of this year, according to the glass accounts records, ETT has made 364 billion MNT in sales as of June 17. The largest purchaser was Chalco, accounting for 40% of the coal exports during the period.

Last year ETT paid 490.1 billion MNT in taxes and contributions to the state budget.  According to official records, the company has contributed 102.3 billion MNT in the first half of this year and is projecting a total contribution of 600 billion MNT by the end of the year. In addition, ETT spent 339 billion MNT in operating costs during the first half of this year. This includes an outstanding 2020 payment of 100 billion MNT payment to TTJVCO.  Last year, total extraction costs reached 367 billion  MNT according to glass accounts records.  This would put 2020 official operating cost at 470 billion MNT. Since the TTJVCO contract has expired last year, a new operator tender was announced in March with the hopes of bringing in more cost-effective operations. 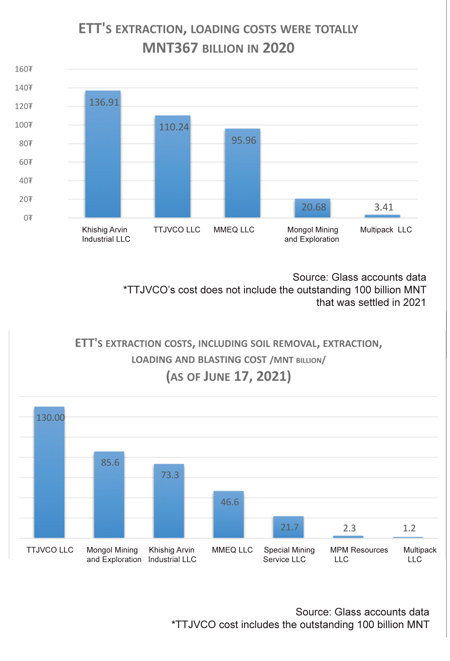 In terms of transparency, ETT is a role model for the mining sector in terms of implementing the reporting requirements of the Glass Accounts law passed in 2014 to improve financial transparency amongst state owned companies.  It has created a Glass Section  on  the ETT.mn and link its website   to the official government reporting (glass accounts) webpage. These changes and compliance initiatives were in preparation for the planned 2020 international IPO which was delayed due to global conditions. The compliance and transparency of ETT should serve as a model for other state-owned enterprises, and Oyu Tolgoi LLC in particular.

Despite the current challenges due to the COVID pandemic and its impact on global markets, ETT’s current financial indicators are stable.  Although achieving this year’s revenue targets may be a challenge, the first half of 2021 has shown that changes in contracting and current export sales volumes are on track for a positive end of year.  This is bolstered by the success of the initial bond sales generating nearly 600 billion MNT and opening the way for further issuances targeted to raise another 1.4 trillion MNT.  Although debt levels are increasing, they are in support of the projected 10 trillion in capital projects to be developed over the next five years.  These projects will increase ETT’s capacity and value add, improving the future outcome leading to projected annual revenues of 10 trillion MNT.  As the country’s current taxation “cash cow”, the projected expansions will turn it into the “investment cow” through its development of strategic infrastructure such as rail and power generation. This leads the way for Erdenes Tavan Tolgoi to become one of the country`s largest and most stable contributors to the national coffers.  But for this to occur, there will be a need to efficiently manage the investments in order to ensure sustainable, long-term benefits for all of Mongolia.