During the last year, Mongolia’s external debt has increased by over $1 billion. Specifically, the first quarter government debt was 15.7 percent higher than during the same period last year. There is an expectation that the country’s external debt will continue to grow till the end of this year, but it would “easily fit” within the 70 percent limit set by law. The Ministry of Finance even presented an estimate indicating that this year’s total will be lower than the previous year compared to the GDP. According to the previous Fiscal Stability Law, the balance of government debt should have been kept at 60 percent of GDP this year. The implementation of this requirement has been delayed to 2024 under a budget amendment and is a result of the pandemic impacting the government’s goal. It is not a secret that the country halted the threat of increasing the foreign debt through the use of internal reserves, draining state-owned mining companies, and putting the Bank of Mongolia reserves into circulation.

However, it is expected that government domestic debt will be reduced. As the interest rate of the foreign debt is low compared to domestic, everyone can understand the government policy to reduce interest. In other words, the government’s domestic debt and bonds have been reduced while foreign loans have increased.  As a double-edged sword, the issue of the national foreign debt has become a topic of attention during the COVID-19 pandemic.

More of the country’s national debt is to foreign sources, making the government dependent on external conditions and international markets. The Bank of Mongolia has indicated that declining mineral prices, slow economic growth and currency depreciation could have negative impacts on the stability of the foreign debt. Therefore, the economic growth rate is particularly important in terms of the debt burden. National Statistical Office noted that in the first quarter of this year, Mongolia’s economy grew by 14.8 percent and decreased to 6.3 percent growth by the end of the first half, signaling that the growth is slowing. Despite rapid growth in mining sector, agriculture and household consumption declined. International organizations predict that the country’s economy will grow by 5-6 percent this year and by 6-7 percent next year. But the Ministry of Finance predicted that growth will be 6.5 percent this year and 4.6 percent next year. According to economists, 6 percent growth should not be celebrated when we consider that in 2020 growth declined by 5.3 percent. It is fortunate that despite domestic challenges caused by the pandemic, the rising mineral prices has supported continued economic growth. The debt to GDP ratio will continue to increase as economic growth continues to slow and government debt increases to cover the shortfall. Although the pandemic continues to create challenges, it cannot be blamed for everything. Since there has been little diversification in foreign trade, current deficits need to be financed through foreign loans and bonds and further increase foreign debt. 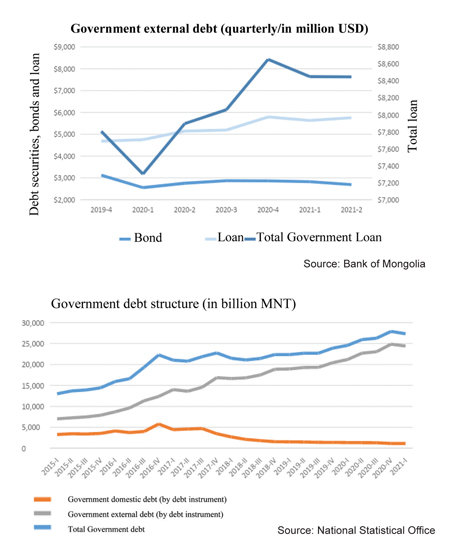 During the period of 2021-2024, Mongolia must repay or refinance a total of $13.1 billion of foreign debt. The Bank of Mongolia indicated that $5.7 billion is for loans obtained by the government and the Development Bank, $1.8 billion from swaps by the Central Bank and the remainder from the private sector. 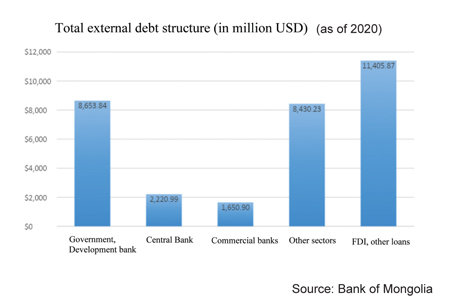 However, foreign debt has not only increased for Mongolia, its true for the entire world. For example, in 2019 Great Britain accrued GBP 57 billion in new debt. Its national debt has increased by GBP303 billion to over GBP2.1 trillion during the 2020-2021 fiscal year. This equals to 97.7 percent of the country’s GDP, the highest level since the World War II.

In other countries and regions, the amount of their foreign debt has also significantly increased. IIF has estimated that during the pandemic, the global debt has increased by $24 trillion in 2020 alone. As a result, total amount of the debt owed by the countries has reached to a historical high of 355 percent of their GDP ($281 trillion). Half of this debt is due to government economic support programs for the pandemic. The organization estimated that in 2021 government debt will increase by another $10 trillion, similar to last year. The IIF highlighted that it will be more difficult for governments to make decisions on when and how to stop supporting their economies and not repeating the mistakes made during the 2008 financial crisis.

The government of Mongolia has to gradually reduce the pandemic related social supports starting from 2022. It has managed to pay off part of the Chinggis and Gerege bonds by refinancing them through a lower interest $1 billion bonds from the Century Project. Through the Century project framework, $500 million raised  at 3.5 percent with the term ending in 2027. The other $500 million raised at 4.45 percent and is due in 2031. The challenge will be 2023 when $1.8 billion of Chinese swaps come due. In 2012-2016, the Bank of Mongolia made a swap agreement of $1.9 billion with the People’s Bank of China at a rate of 2 percent above the annually calculated Shanghai Interbank Offered Rate (about 2.7 percent). The initial term was due in 2017 but was extended to 2020 and again till 2023. This is a challenge for the Bank of Mongolia as it struggles to accumulate enough reserves to repay the debt.

As of July, Mongolia’s foreign currency reserves were $4.58 billion, $200 million lower than in March. Although this is a nearly historic high level of reserves, the Bank of Mongolia has indicated this is still 21 percent below the estimated ARA minimum level. Bank of Mongolia says conditions are not optimal for continued market interventions by government, despite the government’s criticism. Should Mongolia successfully manage to remove the 2023 debt, this will begin to improve the debt to GDP ratio.

Also of concern is the geopolitical issues of Mongolia’s foreign debt.  As indicated in the graph, Mongolia’s external debt is very much dependent on its neighbor to the south. With the exception of Netherland, which issued $8 billion in loans primarily for the Oyu Tolgoi mine development and multiple lending sources, China is the largest holder of Mongolia’s debt. If combined with Hong Kong, the total debt is over $5 billion. It is important to carefully consider the sources of funding future mega infrastructure projects. There is a need to balance the debt structure by sourcing financing from Russia and third neighbor partners. Although securing lower cost financing is important, attention must be made to the specific terms and conditions often imposed by lenders. This can include restrictions on product sourcing, contracting and workforce engagement in favor of the lender country. Foreign bonds provide an advantage as they provide little restrictions or conditions on spending, but often incur higher interest rates. Despite this, it is apparent that the Mongolian government is shifting foreign debt structure away from bonds in favor of loans.

At the end of 2020, Mongolia’s total external debt was $32.3 billion, double the country’s GDP and is over the tolerance level. According to the IMF, it is estimated that Mongolia’s external debt will decrease to 178 percent of GDP by 2025 and continue a moderate decrease over the mid-term. However, the Bank of Mongolia is concerned that these predictions are very fragile and threatened by increasing loan interest, slow economic growth and the potential decline of mineral prices and volume of exports.