2021 was the year of successful infrastructure projects

-Draft laws submitted to the parliament for discussion-

Mongolia’s mining sector is entering the new year, overcoming many challenges caused by the COVID-19 pandemic. Repeated quarantines and border closures slowed down many ongoing and new projects and put them at risk. However, the government and relevant ministries took a number of important steps to address these issues.

Mining involves a comprehensive system of accountability. The work to reform the legal environment of the mining sector intensified, and some draft laws were developed and submitted to the parliament during the autumn session. It should be noted that the draft laws were developed in accordance with the Constitutional Amendment and the “Vision 2050” Strategic Policy Document as well as the Action Plan of the Government of Mongolia for 2020-2021.

Parliament’s adoption (29th January 2021) of the law on supporting oil refineries will provide a necessary support for the construction of an oil refinery in Dornogobi aimag. The government generally supported the draft law (29th September 2021) on mineral products exchange and the draft law on heavy industry (13th October 2021); these laws will now be discussed at the autumn session of the parliament. Minister of Mining and Heavy Industry G. Yondon emphasized that the adoption of these laws has a wide range of benefits, such as the equal distribution of mineral wealth to every citizen, improving the investment and business environment, increasing the value of mineral products which will result in the development of other sectors of the economy. There is an expectation that these draft laws, developed in 2021 and some of which were supported by the government, will become effective next year and contribute to the development of the sector. However, success will depend on overcoming the ambitions and interests of political groups and factions.

How did mining projects advance in 2021? 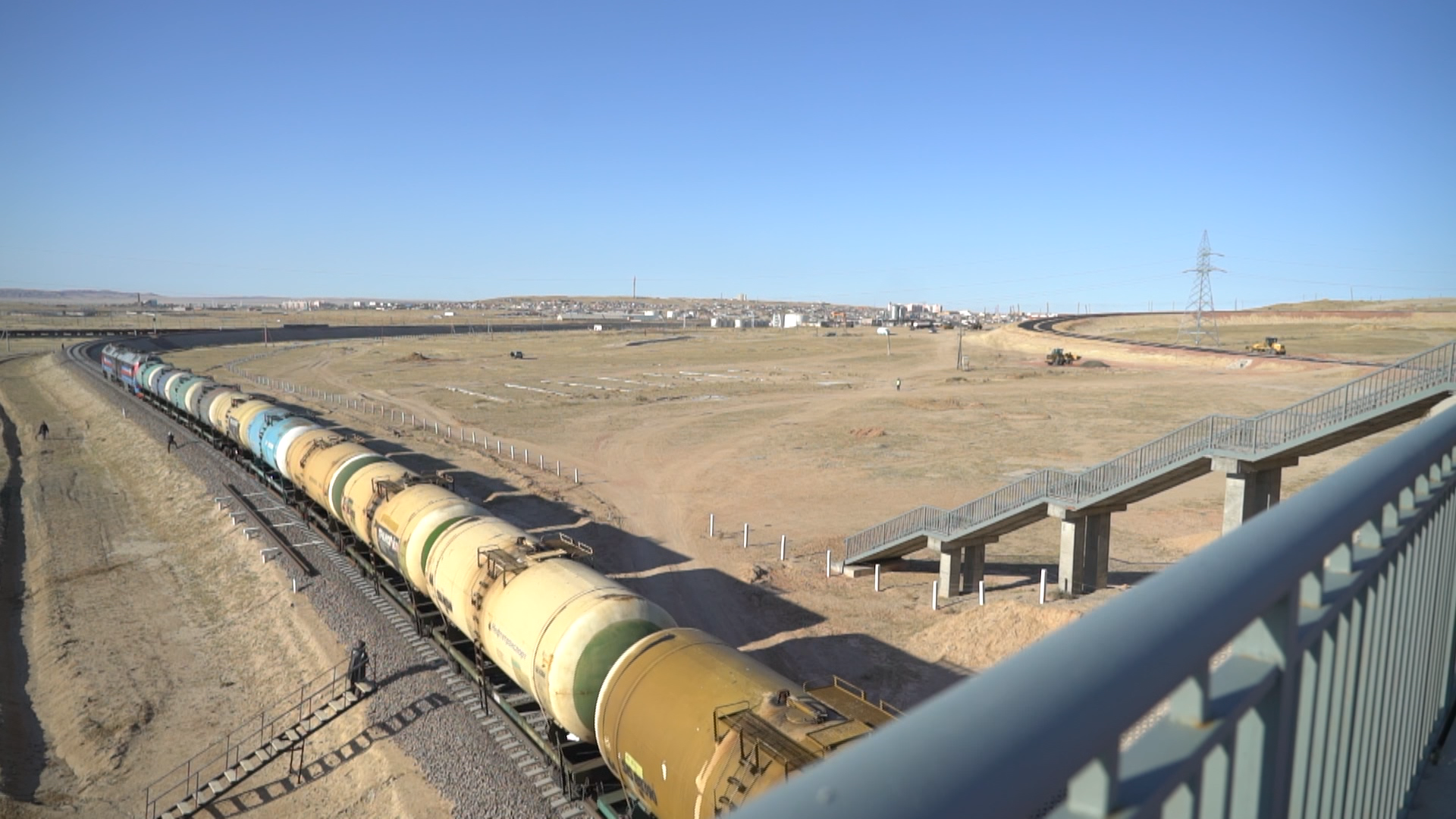 The parliament approved important laws to support the construction of an oil refinery which is expected to begin next year. Government support for large strategic enterprises allows them to speed up some of their work. This year, the government announced a tender for the construction of an oil pipeline and allocated the Davst XXXI oil exploration field in the Matad and Khalkh Gol basins of Dornod aimag to the refinery.

Currently, the engineering and technical drawings of the plant are completed. Work on the Non-Technological Facility (EPC1) contract, signed last year, began in March 2021. The selection of the General Contractor for the construction of industrial facilities (EPC-2,3) is underway and is scheduled to be completed by the end of 2021. According to the management of the “Mongolian Oil Refinery” state-owned company, the building of the first phase of apartments in the 550-family town is 90% finished.
The building of infrastructure (railways, roads, power transmission lines) has been completed. The oil refinery is a brand new development that lays the foundation for the heavy industry. The project will address logistics issues in a systematic way, and plans to build a crude oil pipeline six months before the plant is commissioned.

The feasibility study for the coal processing plant was discussed and approved by the Mineral Resources Professional Council in April. In fact, in the same month that the feasibility study was approved, the government passed a resolution at its regular meeting on measures to be taken to intensify operations at the Tavan Tolgoi deposit. The total funding of the project is $875.7 million, of which $335.6 million will come from the government to finance the construction of Module 1 which is expected to be finished by 2023. The total capacity of the concentrator is 30 million tonnes of coal per year and the Module 1 is capable of processing 10 million tonnes.

The A6-20 business plan for 2021-2025 of Erdenes Tavan Tolgoi states that the construction and installation of the coal processing plant will begin in the first quarter of 2022 and the plant will start operating in the second quarter of 2023.

The government made key decisions this year regarding the construction of the Tavan Tolgoi power plant based on the Tavan Tolgoi deposit. Minister of Energy N.Tavinbekh mentioned in an interview with the Mongolian Mining Journal that according to the Government Resolution No. 175 issued in 2020, 30% of Tavan Tolgoi Thermal Power Plant was transferred to Erdenes Tavan Tolgoi JSC to address the investment issues. The Ministry of Finance will organize a competitive tender to raise the remaining funds.

An international open tender was announced on October 21, 2021, and the contractor shall be selected within 90 days. This means that the winner will be identified in the first month of 2022. Under this tender, Erdenes Tavan Tolgoi JSC, as a project initiator ,will finance up to 30% of the total project cost, and the bidder will submit a proposal (EPC + F) to finance the remaining investment based on government guarantees. If the tender is successful, a construction contract will be signed with the winner within the first quarter of 2022. In 2025, Mongolia expects to receive a new 450 MW thermal power plant. In other words, the project requires a total of $808.2 million of investment over 42 months.

Erdenet Mining Corporation awarded the title of “Hero of Mongolia” 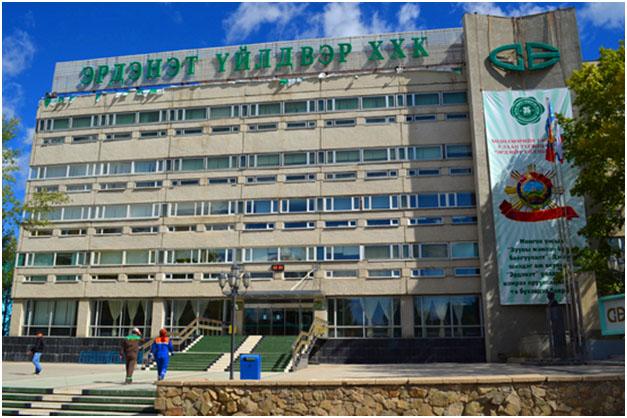 On July 10, 2021, the Erdenet Mining Corporation was awarded the honorary title of “Hero of Mongolia”. This award was given due to many outstanding achievements including contribution to the development of Mongolia, supporting economic and mining sector growth, strengthening of human resources, contributions to the state budget, and helping households and businesses to overcome economic challenges during the COVID-19 pandemic.

The Erdenet Mining Corporation will continue to provide support during this pandemic until the end of 2021. The Government of Mongolia set a goal in the Action Plan for 2020-2024 to increase the production capacity and efficiency of the Erdenet Mining Corporation by expanding the open pit mine, increasing processing capacity and renovating repair and maintenance facilities.

Currently, mining levels are declining, making it difficult to mine, ore grades are decreasing and costs are going up. Therefore, plant expansion and renovation began in 2021 to increase its profitability and reduce costs. At the open pit, the construction of a facility to produce metal structures for cyclic transportation technology, the crushing plant and the conveyor system are 100% complete. In addition, 99% of the earthworks for the expansion of the processing plant were completed by the end of October 2021. This year, the government decided to establish a copper concentrate processing plant as part of the mining, мetallurgy and chemical industry complex park supported by the Erdenet Mining Corporation. The detailed feasibility study, environmental and social impact assessment, technical and technological level assessments were completed.

As part of building the mining and metallurgical complex, QSC LLC is implementing the “Mongolian Steel Complex I” project at the Darkhan Metallurgical Plant with a production capacity of 350,000 tons of steel castings per year. This project will be based on mini blast furnace technology and include coking plants and other relevant infrastructure. This project will allow the supply of high quality steel products made of primary steel to the Mongolian market, without depending on raw material resources. 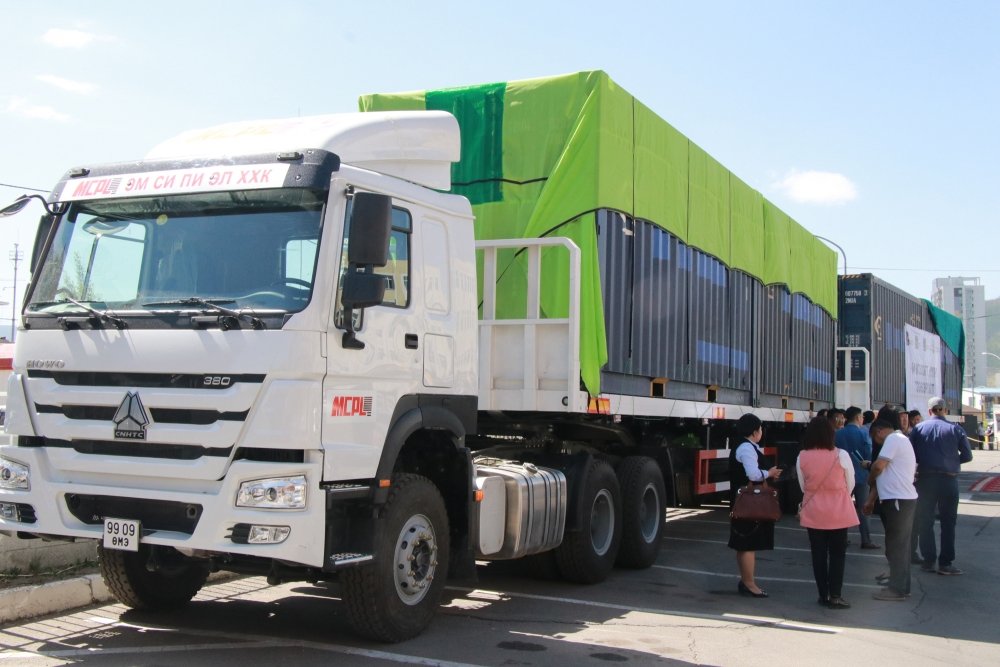 The establishment of container terminals this year at key border points, which account for 95% of Mongolia’s coal exports, is a new development in the mining and infrastructure sectors. The construction of the Gashuunsukhait coal container terminal was completed on 23rd September this year. The terminal was built by the initiative of the government and the efforts of the private sector in just two months. The news of such rapid construction was greeted with great surprise by our southern neighbor. In November 2020, the Ministry of Mining and Heavy Industry submitted a proposal to the Border Port Council to build a container terminal in November of 2020. Last December, the government decided to build an additional gateway at the Shiveekhuren border station.

This assessment work was carried out in a short period of time, and the decision of the Mongolian Government to establish a terminal in July 2021accelerated the process. The Gashuunsukhait container terminal will be located on 30 hectares, at a distance of 236 km from Tsogttsetsii soum, Umnugobi aimag. The project began on 6th July. It was funded by Energy Resources LLC, Erdenes Tavan Tolgoi JSC, and Tavan Tolgoi JSC, and a total of 430 engineers and technicians from seventeen subcontractors worked on the project.

Currently, preparations and earthworks are underway for the construction of a container terminal at Shiveekhuren, that is about 60% complete. As part of the construction of the terminal, an additional customs checkpoint was built by Mongolyn Alt LLC and handed over to the General Authority for Border Protection. The container terminal will operate 24 hours a day, transport 8,100 containers per day and export 8 million tonnes of coal a year. 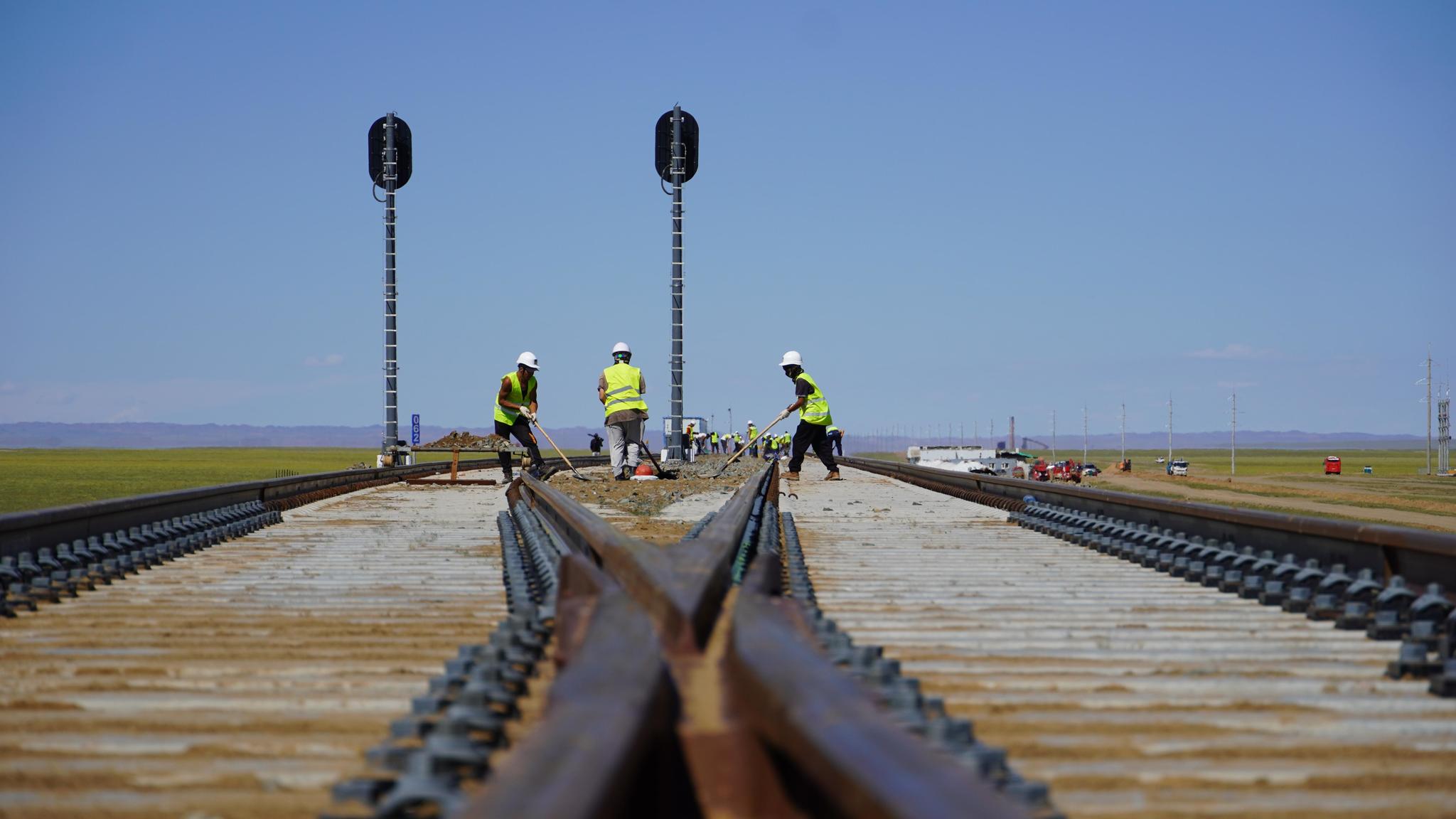 It took many years for China and Mongolia to agree on the Gashuun Sukhait-Gantsmod railway crossing point. This year the government finally resolved this issue. The Tavan Tolgoi Railways company, responsible for the construction of the Tavan Tolgoi - Gashuun Sukhait railway, plans to finish the railway by 1st July 2022. The company is building a 240 km long road from Tavan Tolgoi to Gashuun Sukhait, with six junctions and two stations. The total length of the railway will be 313 km passing through Khanbogd, Tsogttsetsii and Bayan-Ovoo soums of Umnugobi aimag.

The Ministry of Mining and Heavy Industry reported that about 2,300 people, 800 vehicles and heavy machinery were working at the project site in the third quarter of 2021. Currently, the project’s underground infrastructure is 96.8% complete, the earthworks of the shipping area are 100% complete, the earthworks at the border crossing are 94.9%, installation of power lines is 61.5% done, and setting up the alarm system is 36.4% complete. In addition, the construction of railway stations, junctions, office buildings and apartment buildings is underway, and a total of 220 km of railways has been built under the project.

For the first time in history, Mongolia has independently built 416 km of railway between Tavan Tolgoi and Zuunbayan. The government aims to build 6000 km of national railway network under the New Railway project that was stated in the Government policy on railway. The first phase of this project, the construction of 416.1 km of Tavan Tolgoi-Zuunbayan railway, was completed with domestic funding within two years.

The Tavan Tolgoi-Zuunbayan railway, which is being built by Zuunbayan Railway LLC, is a third-class railway with one station, 6 junctions, 27 bridges and 595 pipes passing through five soums of Umnugobi and Dornogobi aimags. The General Staff of the Armed Forces is working on the underground infrastructure. Ulaanbaatar Railway JVC, the general contractor, is working on the surface transportation infrastructure. The construction work is 95% complete, according to an official statement from Mongolian Railways. The company is preparing to send a first train as a test. Low coal output recently caused delays in funding from Erdenes Tavan Tolgoi and slightly slowed down the construction work.

In any case, a number of facilities with a complete engineering network were constructed along the 416.1 km Tavan Tolgoi-Zuunbayan railway including one station with reinforced concrete frame, six junctions and apartment buildings in December 2021.

The construction of the 90 MW plant will be carried out by Power Construction Corporation of China Ltd and Powerchina Chengdu Engineering Corporation Limited. Construction is scheduled to begin in April 2022 and finish in 2026 with operation starting in 2027. This plant will generate 366 million kWh of electricity per year and supply consumers of the western and Altai and Uliastai power systems. A 7-diameter long pressure pipe will be laid across the mountain as part of the construction of the dam without altering the natural structure of the Khovd River. This will be a historic development in our country.

Initially, the plant was estimated to cost around $288 million, but the selected partners will spend $271 million to complete the construction in 61 months. Despite the start of such a large-scale construction project, the Umnugobi soum’s Citizens’ Representatives Khural in Uvs aimag passed a resolution in December 2021 to stop the construction of the hydropower plant, which was against government policy. The soum Khural believes that the plant will destroy the Khovd River’s beautiful forests, pastures, priceless historical and cultural heritage and affect the livelihoods of local residents. 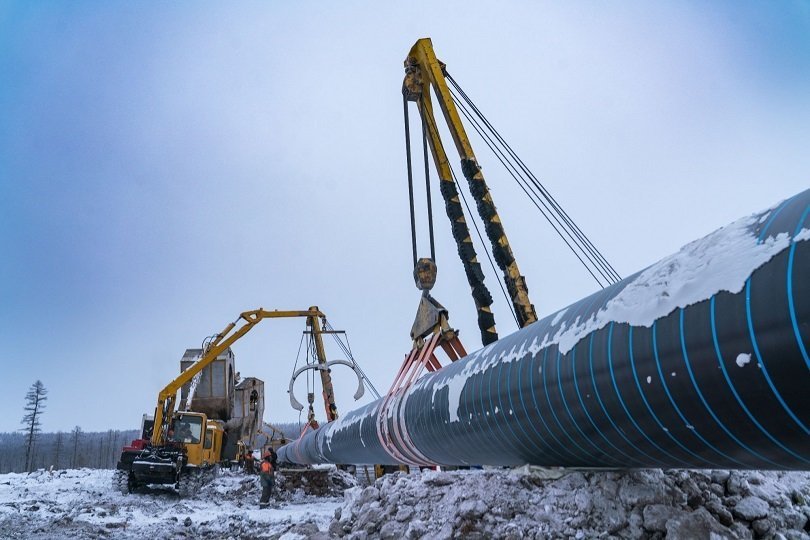