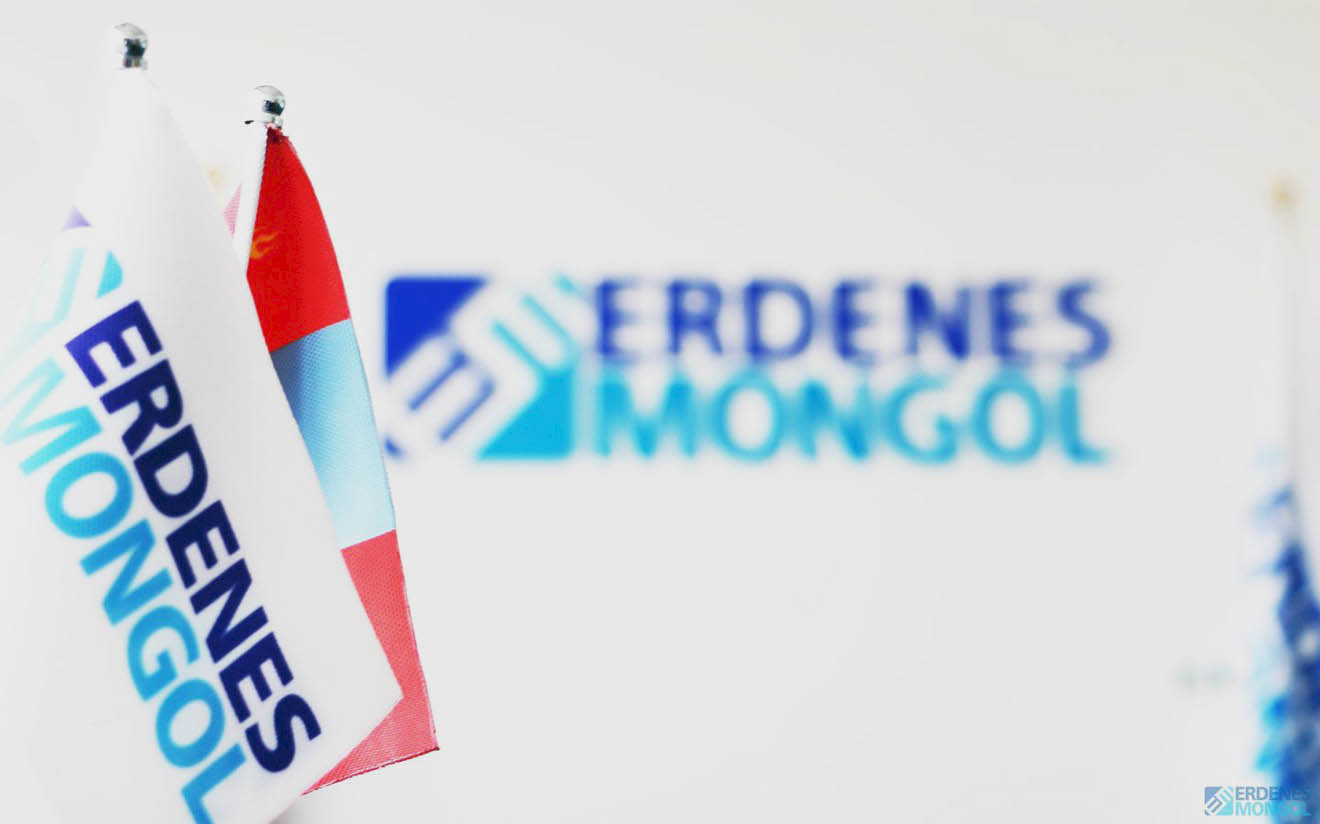 Erdenes Mongol is officially en route to becoming a wealth fund, as the Government seeks to get the Parliament to approve its draft Law on the National Wealth Fund. While the full draft law has not yet been made public, the main issues that it covers were presented. In the past, there have been questions around how Erdenes Mongol could be transformed into a wealth fund and whether this would increase the financial burden in the mining sector. It has become clear from the statement of O.Batnairamdal, Deputy Minister of Mining and Heavy Industry,  that the creation of this new wealth fund will not put additional financial burdens on the mining sector. Under the draft law, Erdenes Mongol will also undergo a structural change.

Erdenes Mongol LLC was established to represent the state on strategic mining deposits. The question now is whether it could be transformed into a company to transfer high dividends to Mongolians. Deputy Minister O.Batnairamdal is confident that it can. The dividends paid out from the profit of Erdenes Mongol’s portfolio companies will go towards the new “Development Fund”, which will finance large-scale domestic projects. The establishment of the fund follows the Law on the National Wealth Fund, which requires the Government to have Savings and Development funds. However, the question is how much the Baganuur and Shive Ovoo coal mines of Erdenes Mongol, operating at a loss can allocate to the Development Fund. Otherwise, the plan is just a dream.

But it is too early to celebrate. Erdenet and Erdenes Tavan Tolgoi have, through its profits, not only been major funding sources for large-scale social welfare projects but also major infrastructure projects. These costs tend to exceed the sales revenue of the companies. However, the companies also have retained earnings: Erdenet Mining Corporation had a total MNT 1.83 trillion in the first half of 2021 and Erdenes Tavantolgoi MNT 898 billion in the end of 2020 . It is important to remember that any large company operates under loan or debt pressure. Erdenet’s total debt totalled MNT 558 billion as of the first half of 2021 and Erdenes Tavan Tolgoi had over MNT 2 trillion in debt at the end of 2020. Both are high numbers.  At the same time, the improved copper market helped Erdenet’s sales revenue to increase by MNT 700 billion or 78 percent, to reach MNT 1.62 trillion in the first half of 2021. It is important to keep in mind that Erdenes Tavan Tolgoi is expected to invest into its own large infrastructure projects and many of Erdenet Mining Corporation’s investment projects for the mine’s expansion had been postponed. In other words, bringing these two major state-owned companies under the umbrella of the “Development Fund” will result in better organization, but it is not about a discussion on a fund that will progressively multiply its returns. Erdenes Mongol is transforming to the Singapore’s Temasek model i.e. as a holding company. This is positive for the better organization of investments in large-scale domestic projects. In principle, it will be a company to invest into projects with flexible terms and at times in less efficient projects. In this case our expectations should be lower. There should not be excess optimism to see the fund’s progressive growth as the Norwegian Fund. Any type of benefits to the Mongolian people to be allocated from the “Development Fund” could be a very long-term prospect. It took two decades for Temasek to see any actual growth. The Deputy Mining Minister has underlined that the Development Fund will be separate from the state budget. However, the existing “Future Heritage Fund” already sources its funding from the dividends of state-owned mining companies. This means that the Development Fund will not be able to collect all the dividends from the state-owned companies through a green light.

On the other hand, Erdenes Mongol itself has some experience in allocating dividends to the government. In February this year, we heard of Erdenes Mongol paying out dividends on state-owned shares for the first time. Simply put, it was the distribution of dividends related to 2019 operations. That was MNT 20.37 per share owned by the state (100 million shares) for a total of MNT 2.037 billion transferred to the Government agency for policy coordination on state property. Although not a large amount, it was a historic event for a company to allocate dividends for the first time since its establishment in 2007. How do we ensure more wealth distribution by Erdenes Mongol in the future?

On 10th November 2021, the Government mandated Erdenes Mongol to draft a proposal to improve the profitability of its operations, reduce inefficient costs, eliminate operational inefficiencies through structural changes and update rules, dissolve or merge unnecessary subsidiaries / affiliate companies. Additionally, financial reports of state-owned companies shall be publicly available and transparent, including contributions to the state budget and other important financial information.

However, Erdenes Mongol’s financial reports are not yet public. Its financial information is only accessible through some of the National Audit Office’s reports. The company’s retained earnings were equal to MNT 6.56 billion and its total debt was MNT 266.2 billion in 2019.

Let’s take a look at the current financial state of Erdenes Mongol. The ‘glass account’ will give us an idea of the company’s revenue, expenditure, and profitability. 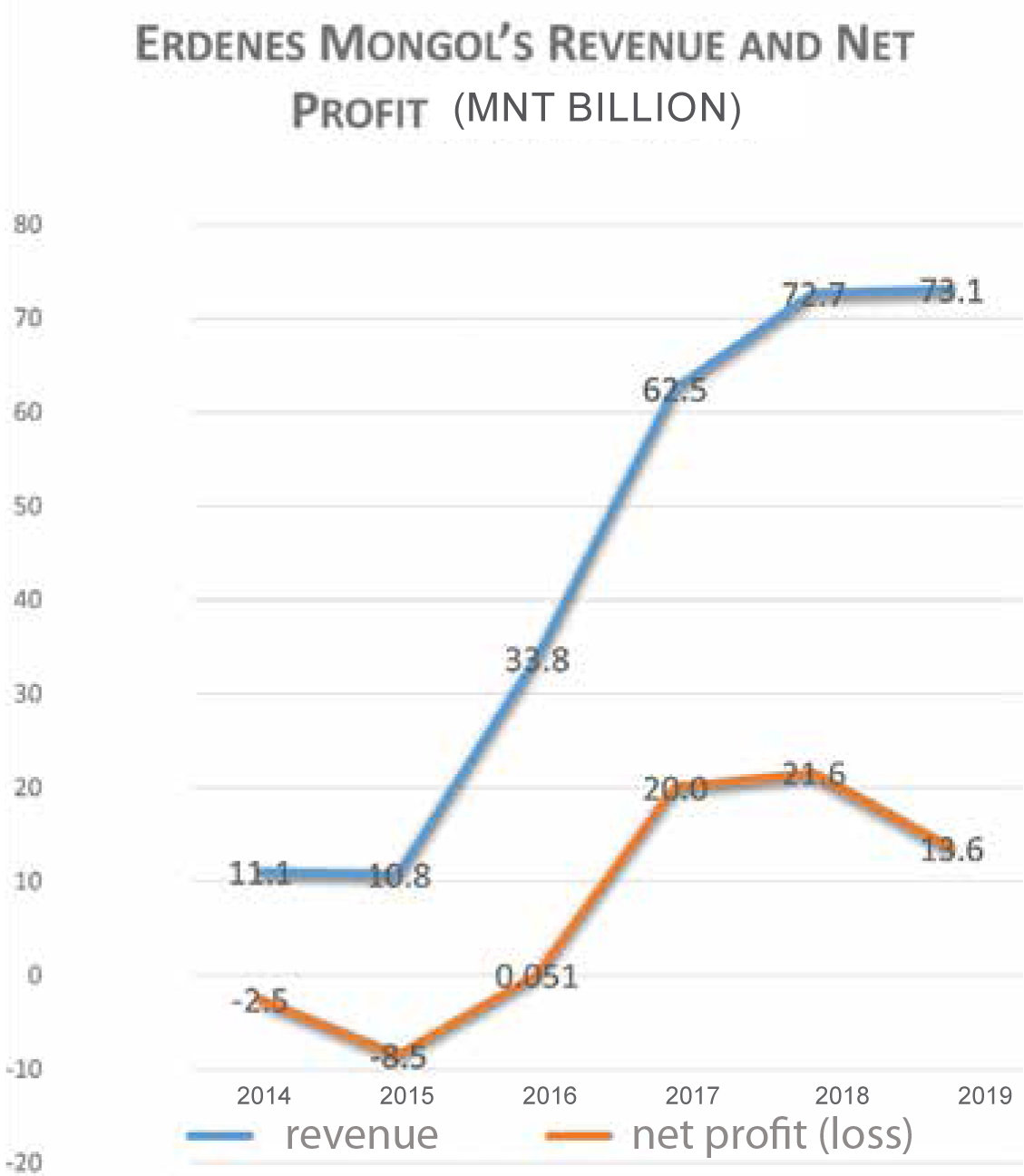 Erdenes Mongol reports transactions of over MNT 5 million in addition to the salaries paid in the ‘glass account’. This is a huge progress for a state-owned enterprise. According to the ‘glass account’ website, Erdenes Mongol has recorded MNT 250 billion in revenue and MNT 253.9 billion in expenditure in the first 11 months of 2021. It is important to note that the high number was a result of an MNT 215.5 billion bond as part of the MNT 1-million support payments to elders without a pension loan. If that is subtracted, Erdenes Mongol’s revenue would stand at MNT 33.8 billion MNT and expenditure at MNT 38.4 billion; expenditure being higher than the revenue.

Breaking down its revenue streams, toll road fees make up most of its revenue. Specifically, the company collected MNT 32 billion in revenue for toll roads.

Below is a breakdown of the company’s revenue streams: 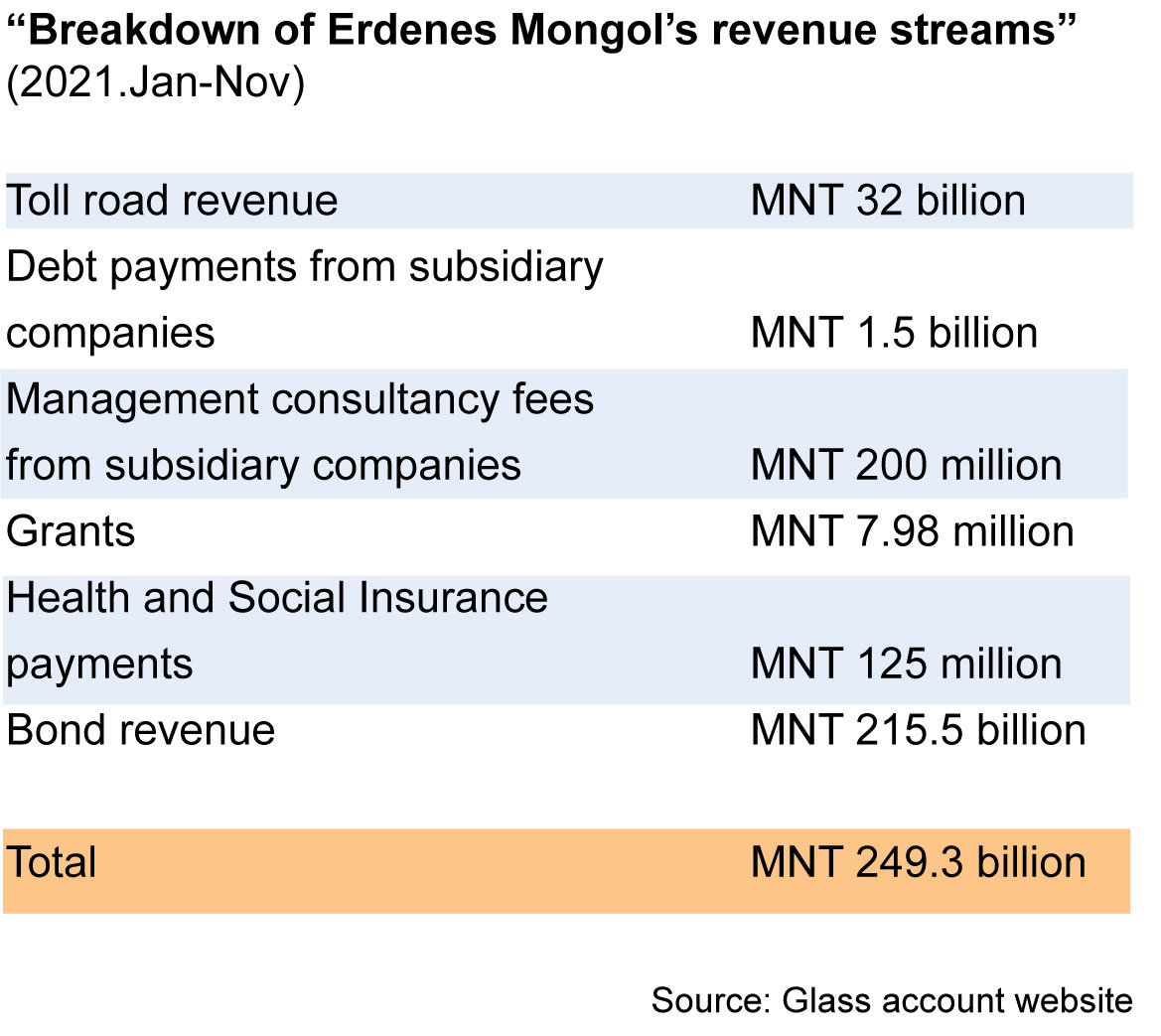 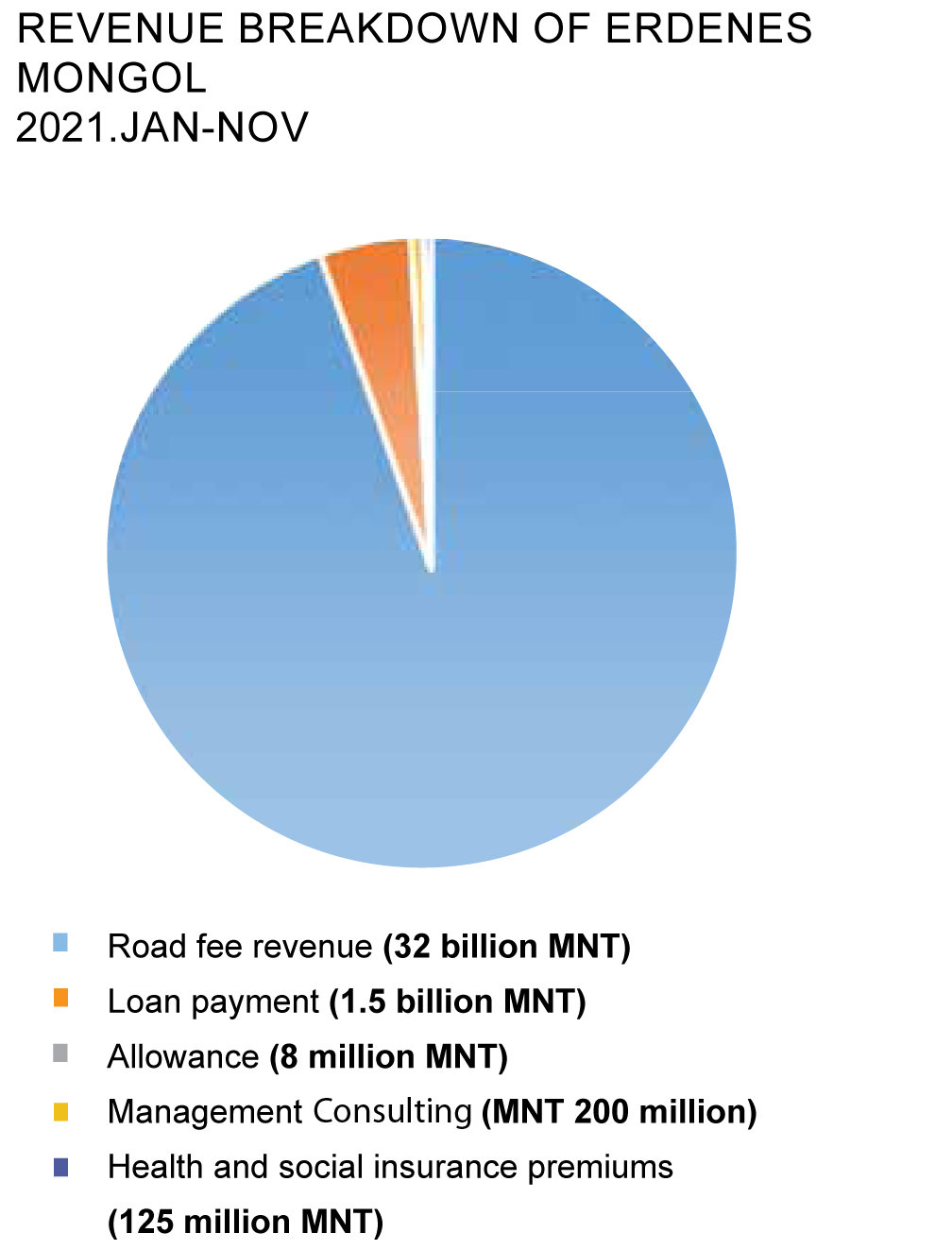 Road toll revenue made up 94.6 percent of the company’s total revenue since the start of 2021. A similar level was recorded in the past few years. In other words, it is evident that Erdenes Mongol does not receive much revenue from its subsidiary companies including Baganuur and Shive Ovoo. Erdenes Mongol’s revenue from road fees has significantly declined compared to previous years. This was mainly due lower volume of coal exports despite the increase in coal export revenues. 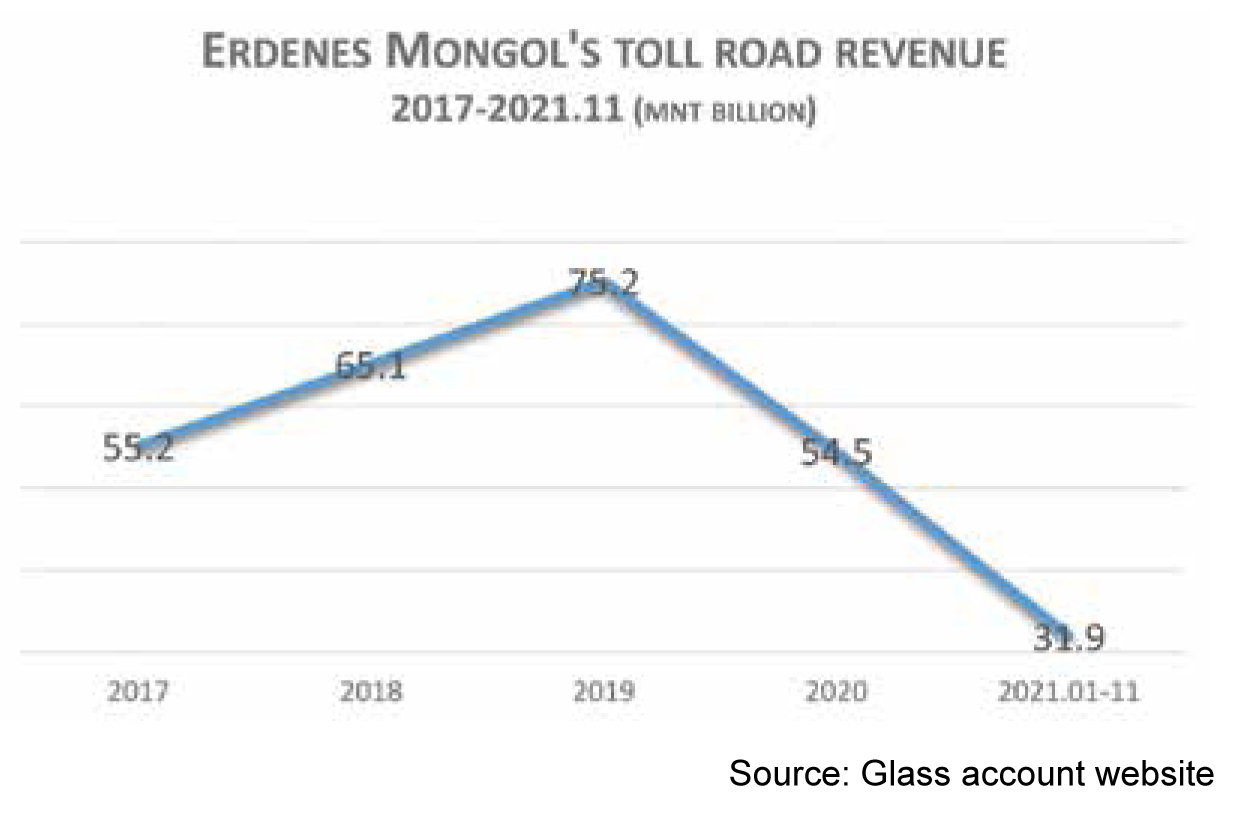 The expenditure totalled MNT 38.4 billion since the beginning of 2021, of which 25 percent accounted for the costs of subsidiary companies. Particularly, Erdenes Mongol transferred MNT 9.7 billion to its subsidiaries. 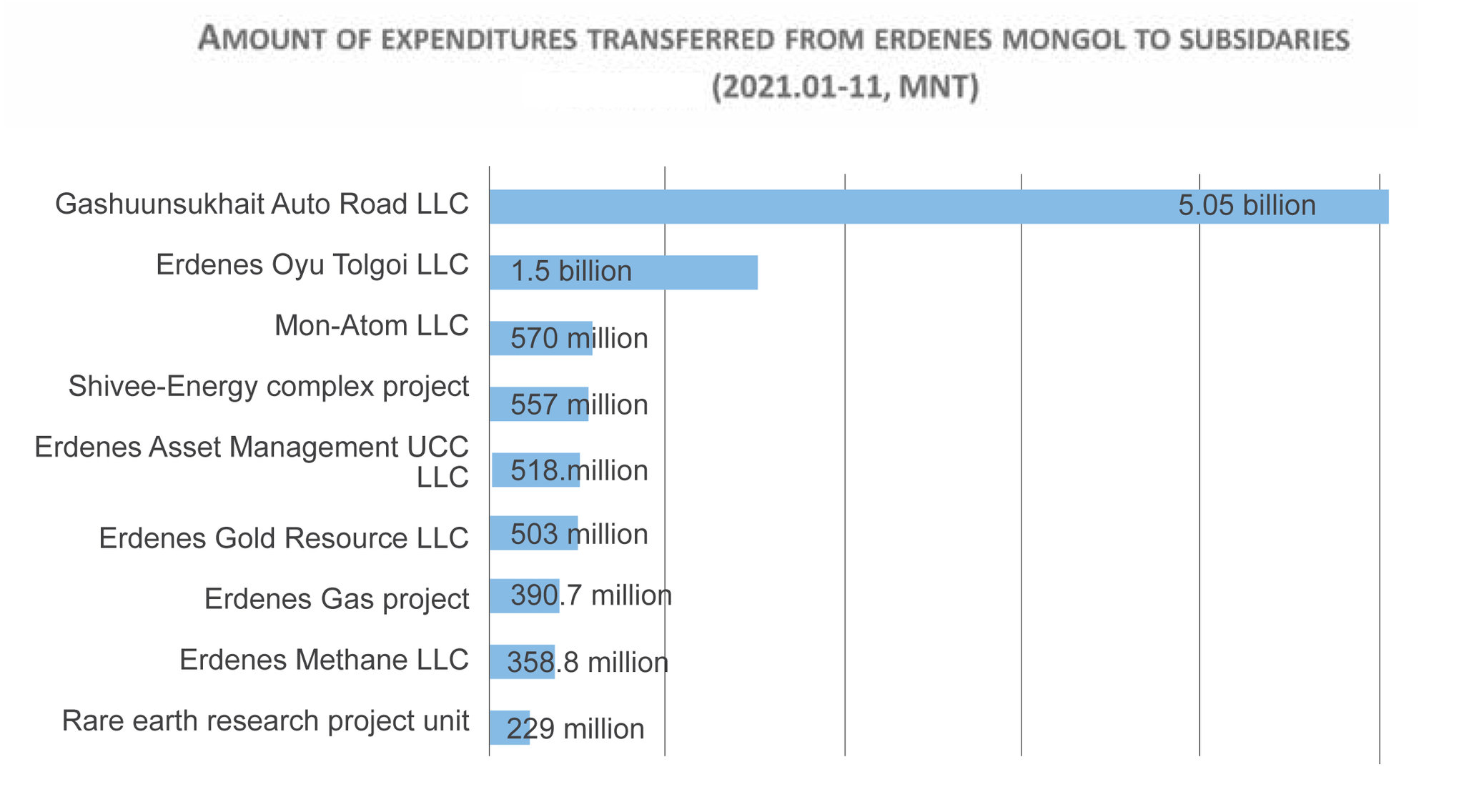 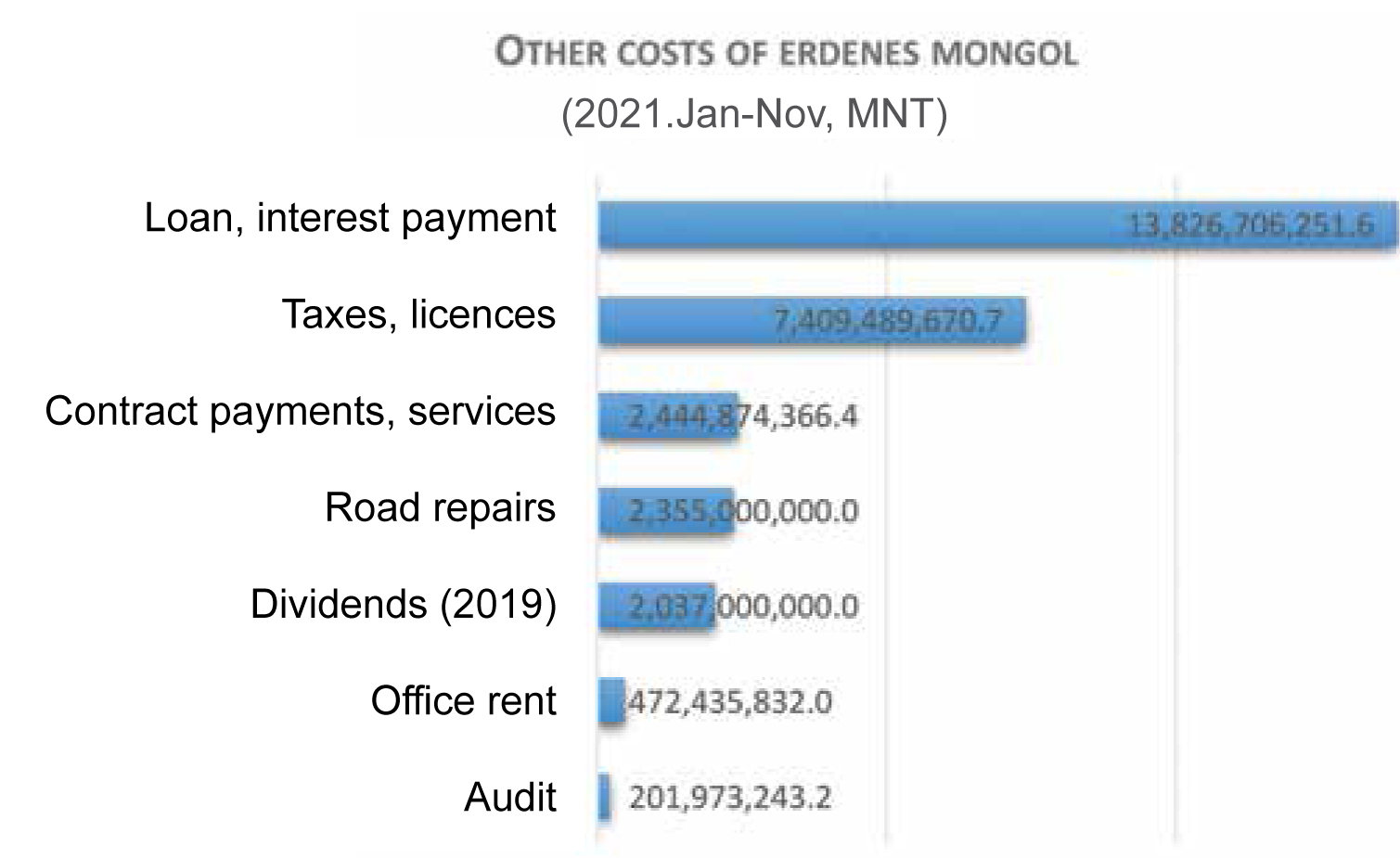 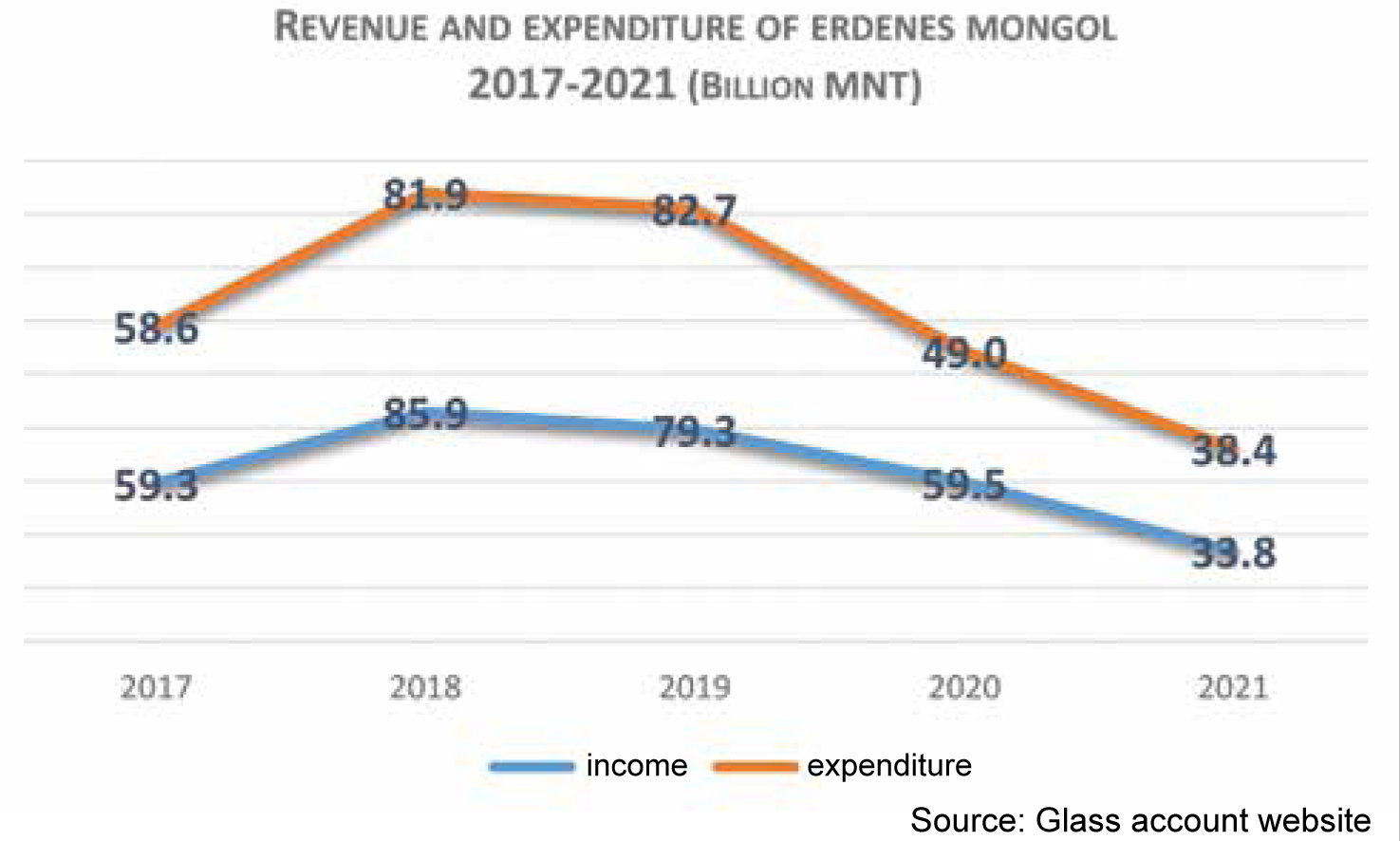 Erdenes Mongol was established in 2007 with the mandate to represent the state in relation to the use of strategic deposits. It has operations in copper, coal, uranium, natural gas, precious metals, and infrastructure.

As of 2020, it is operating with 13 subsidiary companies and three project units. According to the company, it has 4,850 employees including Oyu Tolgoi. Its Baganuur and Shive-Ovoo companies that supply 6 to 7 million tons of thermal coal for domestic consumption. Erdenes Mongol owns 81.5 percent of Erdenes Tavan Tolgoi, the country’s largest producer and exporter of coking coal. Although considered a subsidiary of Erdenes Mongol, the Ministry of Mining and Heavy Industry and the Government agency for policy coordination on state property are considered as implementors of shareholder rights.

The passing of the draft law on the National Wealth Fund will transform Erdenes Mongol into a wealth fund. On the other hand, the “Future Heritage Fund” is currently gaining attention. A regulation in the accompanying laws of the 2022 state budget was approved to allocate MNT 1.46 trillion from the “Future Heritage Fund” for child money each year, or MNT 100,000 per child. In the coming year, MNT 1.06 trillion of the Future Heritage Fund’s total revenue is estimated to come from mining royalty payments and the remaining MNT 404.5 billion from dividends of state-owned enterprises.

There are two takeaways from this. Firstly, the financial burden placed on the Future Heritage Fund to contribute MNT 1.5 trillion annually for the ‘child money’ program prevents it from being developed according to the principles of a wealth fund. Secondly, the Future Heritage Fund will collect a large share of dividends from state-owned mining companies. Therefore, once Erdenes Mongol owns the two large state-owned mining companies through the Development Fund, this new fund may not accumulate enough dividends. Past Government resolution to transfer Erdenet Mining Corporation to Erdenes Mongol were not realized. In terms of Erdenes Tavan Tolgoi, the merger with Erdenes Mongol was expected from a financial standpoint. Thus, the incorporation of the two companies under Erdenes Mongol was a long-awaited old objective. Uncertainty still remains around how to build a large investment fund to distribute dividends on an annual basis.